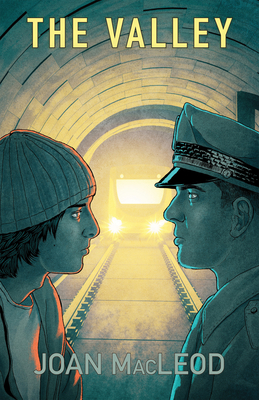 By Joan MacLeod
$16.95
Unavailable, Out of Stock, or Out of Print

Eighteen-year-old Connor, an aspiring author whose fantastical stories foretell his growing struggle with depression, can't wait to be free of his adverb-wielding, solve-it-all mother, Sharon. But six weeks after leaving for university, he drops out and returns home. Dan Mulano is an infatuated new dad and well-meaning police officer whose selfishness is veiled by the lofty aspirations he holds for his family. His wife, Janie, a former addict and exhausted new mom, struggles to cope with the challenges of recovery in the midst of her battle with postpartum depression, which Dan dismisses as "just hormones." A precipitous incident brings the two families together. When Connor's erratic behaviour at an underground train station requires police intervention, Dan responds to the call and makes the arrest, but the teen's jaw is broken during the incident. Is it police brutality or self-harm? For Sharon, there is no question; she portrays Dan as a reckless cop in the media, while he remains silent, refusing to break protocol and
tell his story. Inspired by an event in British Columbia that shattered the public's confidence in the police - the 2007 Tasering death of Robert Dziekanski during his arrest at the Vancouver airport - The Valley dramatizes the volatile relationship between law enforcement and people in the grip of mental illness. In addressing this fraught relationship, award-winning playwright Joan MacLeod empathizes with both parties, each of whom is guided by good intentions but equally challenged by their own cultural biases and flawed humanity.

Multiple Betty Mitchell, Chalmer's, Dora, and Governor General's Literary Award-winning author Joan MacLeod grew up in North Vancouver and studied creative writing at the University of Victoria and the University of British Columbia. Now an internationally celebrated star of the world of the theatre, MacLeod developed her finely honed playwriting skills during seven seasons as playwright-in-residence at the Tarragon Theatre in Toronto, and turned her hand to opera with her libretto for The Secret Garden, which won a Dora Award. She has had many radio dramas produced by CBC Stereo Theatre, including Hand of God, a one-hour drama adapted from her play Jewel, and has written numerous scripts for film and television productions. Translated into eight languages, her work has been extensively produced around the world. Multiple simultaneous productions of her hit play The Shape of a Girl toured internationally for four years, including a soldout run in New York. Her play Amigo's Blue Guitar won the 1991 Governor General's Literary Award for Drama. Her Governor General's Award nominations include one in 1996 for The Hope Slide / Little Sister and one in 2009 for Another Home Invasion. MacLeod also writes prose and poetry, which has been published in a wide variety of literary journals.