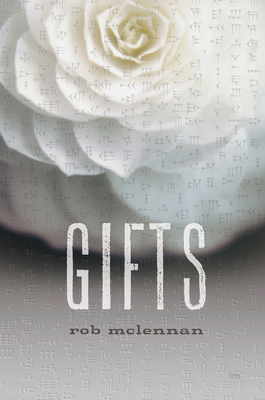 The eponymous first part of mclennan's new book consists of fifty "gifts" each centred around words, phrases, or "glyphs" of language that initiate and replicate their own fractal transformations: some remain simply found fragments about which other words and phrases unfold, some lose themselves into pieces that we forget were once found, some mirror themselves in other forms, others become simply something other in language as it moves both with and away from them, each creating a syntax of meaning that is specific to its own occasion. All are addressed to the poet's intimates--two dozen are, significantly, valentines--the rest admonitions, remembrances, messages and homages made public by the readers' acts of witness.

In part two, "incomplete," we are invited to watch the poet robbed of his intent as unexpected words interrupt his texts, turning declaratives into interrogatives, questions into requests: "would you leave (accidental) behind"--each poem an apparent loop of closure, but one that signifies its "failure" or incompletion by ending, or starting over again, with its first title] word. In part three, "weightless," the poet frees the signifier from the weight of the signified. He brackets and strikes through what we think of as "known" in the "real world" that is always outside language, because it is named]. What unifies or makes these four parts into a book are the personae the poet assigns to the lover: in the first as an intimate; in the second as an interruption of the determinative self--the other that brings us back to the self; in the third as an undefinable and thereby unattainable weightlessness; and finally as the gravitational pull of the landscape itself--all of them "unfinished" at the speaker's age, as the title of part four implies: " sex at thirty-eight] unfinished shield notes: letters to g."

rob mclennanThe author of more than 20 trade books of poetry, fiction and non-fiction in a number of countries, rob mclennan has published work in over two hundred trade journals in 14 countries and three languages, and performed in Ireland, England, Wales, the United States and across Canada.

"rob mclennan is one of the best contemporary poets in Canada."
Barry McKinnon