Nature Power: In the Spirit of an Okanagan Storyteller (Paperback) 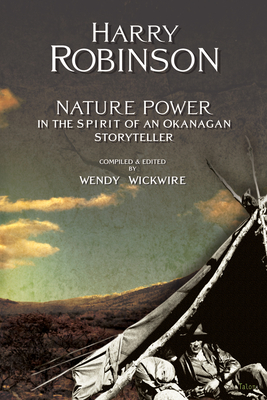 Many of the stories in Harry Robinson's second collection feature the shoo-MISH, or "nature helpers" that assist humans and sometimes provide them with special powers. Some tell of individuals who use these powers to heal themselves; others tell of Indian doctors who have been given the power to heal others. Still others tell of power encounters: a woman "comes alive" after death; a boy meets a singing squirrel; a voice from nowhere predicts the future.

Harry RobinsonAs a member of the Lower Similkameen Band of the Interior Salish people and a rancher for most of his life, Robinson also looked upon himself as one of the last storytellers of his people. As he came to realize fully the importance of the storytelling tradition in his community, he began telling stories in the Okanagan language and became as skilled in English storytelling by his mid-seventies. Wendy Wickwire met Robinson while working on her doctoral thesis and recognized what, as Thomas King would later suggest, may well be "the most powerful storytelling voice in North America." He passed away in 1990--shortly after the publication of Write It on Your Heart, the first of three story collections which will ensure the survival of the epic world of Harry Robinson in many generations to come."

"Epic, mesmerizing tales by a great Okanagan storyteller that lift [one] earily and movingly into a different world."
Michele Landsberg, Toronto Star