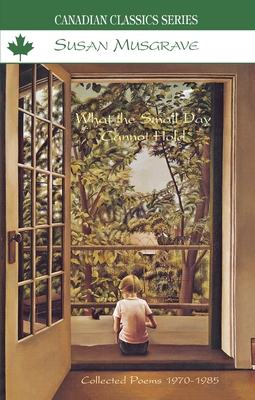 By Susan Musgrave
$18.95
Unavailable, Out of Stock, or Out of Print

Finally a collected Musgrave for those old enough to have been there in the 1970s and those young enough to want to reexperience the generation's wry optimism and ironic fervour. This seven-title canon reissues Musgrave's early must-have literary opus and includes: Songs of the Sea-Witch, Entrance of the Celebrant, Grave-Dirt and Selected Strawberries, The Impstone, Becky Swan's Book, A Man to Marry, a Man to Bury, and Cocktails at the Mausoleum. Originally published by Sono Nis, Macmillan, McClelland & Stewart and Porcupine's Quill, the poems in What the Small Day Cannot Hold reconstitute the lost canon of one of the country's most vibrant and orgiinal national voices. Called the foremost poet of her generation, Musgrave epitomizes the people's poet, bringing to audiences starved for a new language of wide breadth of material startling in its intensity and originality, legendary in its myth-making and monumental in its primal power. From witchcraft to wilderness, from First Nations to the urban nation, from the erotic to the exotic, these poems explode typical expectations and haunt the reader with unprecedented dramatic appeal.

Susan Musgrave has won awards for writing in four different categories: poetry, fiction, nonfiction and children's books. She has been short-listed for the Governor General's Award four times, and has received the Tilden (CBC/Saturday Night) Canadian Literary Award for Poetry (1996) and the Vicky Metcalf Short Story Editor's Award. Her poem Ice-Age Lingerie won first prize in the Panty Lines Poetry Contest (1999). Musgrave has been a writer-in residence at universities across Canada, has juried numerous awards and is active politically in several author-advocacy organizations. She is a regular contributor to the CBC, a past chair of the Writer's Union and lives on Vancouver Island near Sidney, BC.