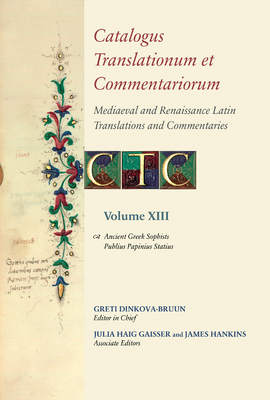 By Greti Dinkova-Bruun (Editor), Julia Haig Gaisser (Editor), James Hankins (Editor)
$95.00
Unavailable, Out of Stock, or Out of Print

This is book number 13 in the Catalogus Translationum Et Commentariorum series.

Founded in 1946 by Paul Oskar Kristeller, the Catalogus Translationum et Commentariorum has become an indispensable research tool for scholars interested in the history of the classical tradition in the West during the Middle Ages and the Renaissance. Each article treats a separate classical author, beginning with a detailed essay on the author's reception from antiquity to AD 1600 and, in some cases, even up to the present day. This 'Fortuna' is followed by a comprehensive list both of manuscript and printed commentaries on each Latin author and, in the case of Greek authors, a list of Latin translations as well. Since the publication of the first volume in 1960, the Catalogus has published articles on nearly a hundred classical authors, with dozens more in active preparation. The project boasts an international team of contributors from fourteen countries in Europe and North America. Given the ever-growing interest in the history of classical reception across departments of English, European languages, and comparative literature, the foundational scholarship that is the hallmark of the CTC has become more vital than ever to research in the humanities. Volume 13 contains two articles, both major contributions of considerable length: the first on the ancient Greek sophists, the second on the Roman poet Publius Papinius Statius.