Lion Lights: My Invention That Made Peace with Lions (Hardcover) 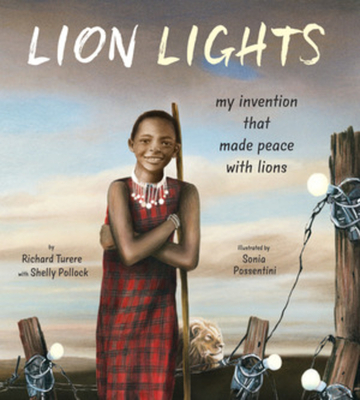 A story of ingenuity and perseverance.

Richard Turere’s own story: Richard grew up in Kenya as a Maasai boy, herding his family’s cattle, which represented their wealth and livelihood. Richard’s challenge was to protect their cattle from the lions who prowled the night just outside the barrier of acacia branches that surrounded the farm’s boma, or stockade. Though not well-educated, 12-year-old Richard loved tinkering with electronics. Using salvaged components, spending $10, he surrounded the boma with blinking lights, and the system works; it keeps lions away. His invention, Lion Lights, is now used in Africa, Asia, and South America to protect farm animals from predators.

Richard Turere grew up as a Maasai cattle herder in Kenya and is an undergraduate student at the African Leadership University, where he is studying Global Challenges with a focus on wildlife conservation. He invented Lion Lights at the age of 12 to protect his family’s cows outside Nairobi National Park from lions, scrounging parts from a junkyard and building the prototype for $15. Lion Lights are widely recognized for their singular ingenuity in promoting a sustainable, peaceful coexistence between humans and wildlife, and Richard shared his innovation with the world at the TED Global Stage in California. He received a special commendation from Africa Leadership Awards for his critical role in protecting and creating awareness around the crisis facing lions in Kenya. He is recognized as Kenya’s youngest patent inventor and, in 2018, received the Anzisha prize award. In 2020 he became a Young Natgeo explorer, and he was a finalist at Future for Nature awards in 2021.

Shelly Pollock taught remedial reading and math to children and adults in the US for twenty-five years. After retiring, she and her husband sold everything and traveled in their RV and Jeep for fourteen years while Shelly wrote children’s stories on a moving table, eventually settling in the Southwest. Shelly hopes that Lion Lights, her debut picture book, will inspire children everywhere to realize that no matter how young they are or how big their challenges, they can accomplish anything.

Sonia Maria Luce Possentini is an award-winning illustrator in Modena, Italy. After earning a degree in Art History at the Academy of Fine Arts in Bologna, she became a painter and illustrator and is a professor of illustration at the International School of Comics in Reggio Emilia. She has illustrated thirteen children’s books, including Night Creatures: Animals That Swoop, Crawl, and Creep while You Sleep (2021, Millbrook Press) and Hold On to Your Music: The Inspiring True Story of the Children of Willesden Lane (2021, Little, Brown).

In a true tale bound to inspire all young would-be inventors, Turere describes how, at the age of 12, he came up with a cheap and ingenious solution to a problem that stumped his own pastoral Maasai people and outside experts. Seeing that fires, fences, and fixed lights all failed to keep lions from the nearby Nairobi National Park from killing his father’s valuable cattle at night but noticing that the predators avoided his flashlight, the young tinkerer experiments with old electrical parts until he develops a stringable set of blinking lights that prove effective enough to earn him international recognition. Along with handsome group portraits of lions and livestock, Possentini depicts the author in both traditional Maasai and modern dress—guarding the herd as a 9-year-old, taking his mother’s new radio apart, and delivering a TED talk and reflecting that he had done “a Maasai warrior’s duty.” Coauthor Pollock adds an overview of the Maasai to go with the closing glossary and a useful list of recent picture books about other young African achievers.
— Booklist

There were a lot of efforts to protect lions and livestock. It was a conservation crisis, really. Expert solutions failed, but Richard came up with something that worked.
— Paula Kahumbu, executive director of the Kenya Land Conservation Trust; chairman of the Friends of Nairobi National Park; CEO of Wildlife Direct; National Geographic Explorer

Lion Lights seem simple, but then again the best solutions always do. Since Richard invented his system, lions have never killed our livestock, and the tension between the Kenya Wildlife Service and local communities has been reduced.
— Dr. Charles Musyoki, Senior Scientist, Kenya Wildlife Service

Richard’s system has been a huge success. People all over Kenya have begun copying his approach to safeguard their livestock—the concept is simple, cheap, and easily replicated. Many of those using it now have no knowledge of who the innovator is. Thank you, Richard!
— Lucy Waruingi, African Conservation Centre; from The Lion Chaser: The Invention That Changed Farming in Kenya