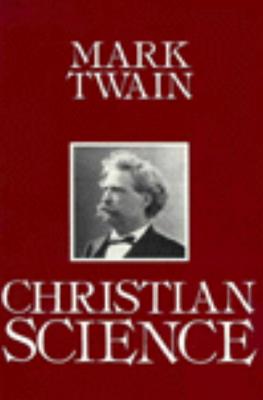 This witty, caustic work is Mark Twain's extended attack on Christian Science and its founder, Mary Baker Eddy, who he once described as the "queen of frauds and hypocrites." In 1898, when he set out to write this book, Twain feared that Christian Science would spread so rapidly that it would control Congress by the 1930's.

Twain, having suffered the intense sorrow and anguish of the death of two of his children, and later of his beloved wife, Olivia, in 1904, reacted savagely to the claim of Christian Science that pain, sickness, and death do not exist. When Harper's refused to publish Christian Science in 1903, Twain interpreted the rejection as suppression and wrote, "The situation is not barren of humor. I had been doing my best to show in print that the Xn Scientist cult has become a power in the land - well, here is the proof: it has scared the biggest publisher in the Union."

In this offensive against Mrs. Eddy, Twain analyzes her greed, her lust for power, her self-dedication, and her incoherent writing. He examines the rules and by-laws of the church with all the strength of his formidable debating skills.

Christian Science was nine years in the making - begun in 1898 and finally published in 1907. This is the first paperback edition of a book that was unavailable to the general public for more than fifty years.

MARK TWAIN was born Samuel Langhorne Clemens in Florida, Missouri, on November 30, 1835, the son of John Marshall Clemens, an avowed freethinker, and his wife, Jane, a believer and connoisseur of the occult. These two opposing forces—freethought and spiritualism—colored the young Twain's view of the world and would later serve as material for his books.

As a child, Twain knew both violence and tragedy. In the town of Hannibal, Missouri, where he lived from 1839 to 1853, shootings and attempted shootings were not unusual events. Twain's older brother Benjamin died when Twain was only six; a few months later, the family lost their home to debt. When Twain was twelve, his father died.

It was at this time that Twain left school to go to work in order to help his financially strapped family, first as a printer's apprentice and later as a journeyman printer; he was also a river pilot, a prospector, and a roving newspaper reporter. Twain's journalistic travels took him throughout the United States as well as to South America, Europe, and the Middle East, from where he sent back entertaining travel letters. While a reporter for the Virginia City Territorial Enterprise, he adopted the pen name Mark Twain. His scathing, observant articles began to earn him a wide and loyal readership. Samuel Clemens/Mark Twain made his readers, and later his listeners during his lecture tours, familiar with his life: skill­fully blending the real and the fictional, he created the char­acter of Mark Twain whom Americans—and the world—recognized and loved in his many books, including The Celebrated Jumping Frog of Calaveras County, and Other Sketches (1867); Innocents Abroad (1869); Roughing It (1872); The Adventures of Tom Sawyer (1876); and his masterpiece, Adventures of Huckleberry Finn (1884).

Eulogized by William Dean Howells as "the Lincoln of our literature," Twain achieved great fame from his writing and earned a fortune. He lost this, however, following his involvement in a failed publishing house venture; thereafter, Twain lectured to clear his debts. The final two decades of Twain's life were marked, as were his first years, by a series of tragedies: during these years he lost in quick succession his beloved wife, Livy; a favorite nephew; his daughters Susy and Jean; and his sister, Pamela. Twain had toyed with the idea that life is a dream and that human emotions and expe­riences are delusions. His work at this time reflects his grow­ing gloominess, pessimism, and contempt for organized reli­gion: Extracts from Adam's Diary (1904) and Eve's Diary (1906) satirized Scripture; Christian Science (1907) ridiculed Mark Baker Eddy's new religion. This is the period, too, of Twain's vitriolic Letters from the Earth (1906; first published in 1962) and The Mysterious Stranger, several versions of which were written during 1905-06 and which was posthu­mously published in 1916. Here Twain denies the existence of a benign Providence, a soul, or an afterlife. Indeed, reality itself is taken away as the Stranger in this antireligious tale—the angel-boy, Satan—asserts that "nothing exists; all is a dream." This and the other works of Twain's last years belie that popular image of the easy, affable American humorist; they reveal instead a man engaged in an often tortuous strug­gle to discover what life is and what meaning, if any, it holds.