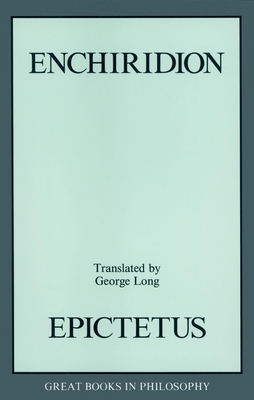 By Epictetus
$11.99
Unavailable, Out of Stock, or Out of Print

The Enchiridion, or "Handbook," is a summary of the teachings of the slave-turned-Stoic philosopher Epictetus (first century A.D.) posthumously compiled and published by one of Epictetus's students. Though brief, this work is universally considered to be the living spirit of Stoicism, wherein the principles of right conduct and true thinking are outlined.

The Enchiridion has played a significant role in the development of modern philosophy and intellectual attitudes, showing secular thinkers how sound reasoning can free them from the shackles of absolutism and emotionalism and, in so doing, live a more tranquil and productive life.

EPICTETUS was born the son of a slave woman about 55 CE in the city of Hieropolis in Phrygia. He went to Rome as the slave of the freedman Epaphroditus, who held the distinguished post of secretary to the emperor Nero and later to Domitian. Epaphroditus allowed Epictetus to attend the lectures of the Stoic philosopher Musonius Rufus, who was impressed by the young slave and trained him to be a Stoic philosopher. After being freed by Epaphroditus, Epictetus began to teach philosophy at Rome.

In 89, when the emperor Domitian banished all phi­losophers from the capital, Epictetus traveled to Nicopolis in Epirus (northwest Greece). There he opened his own school, giving lectures which attracted many students and followers, including the historian Arrian, who collected his master's lectures, probably in eight books, of which four survive. Arrian later compiled a summary of Epictetus' philosophy in the famed Enchiridion, or Handbook.

The Enchiridion is a brief introductory manual on how to transform Stoicism into a way of life. In it are covered rules for proper social and sexual conduct, and for true thinking. Part of right thinking entails knowing how to distinguish that which we can change from that which we cannot. Our lives are subject to many intractables: the vagaries of health and fortune, and, finally, death. But we retain the power to control our thinking, passions, and decisions. In this way we can come to terms with our environment, and thus free ourselves from a world of chance and dependencies.

Epictetus was one of the most important Stoic phi­losophers of the first century CE, along with Seneca, Lucius Annaeus Cornutus, and Musonius Rufus. Stoicism's em­phasis on reason, austerity, and self-control continued to appeal to sober-minded individuals during the next century (the emperor Marcus Aurelius being Stoicism's most dis­tinguished late exponent), before fading as a school in the third century CE. Nevertheless, the works of Epictetus as compiled by Arrian have played an influential role in the development of the modern philosophies of rationalism and secularism.