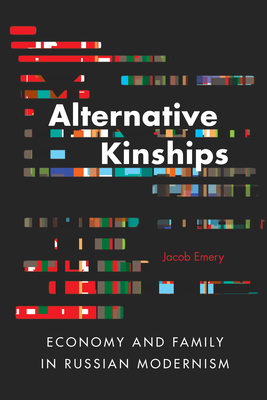 According to Marx, the family is the primal scene of the division of labor and the “germ” of every exploitative practice. In this insightful study, Jacob Emery examines the Soviet Union’s programmatic effort to institute a global siblinghood of the proletariat, revealing how alternative kinships motivate different economic relations and make possible other artistic forms.

A time in which literary fiction was continuous with the social fictions that organize the social economy, the early Soviet period magnifies the interaction between the literary imagination and the reproduction of labor onto a historical scale. Narratives dating back to the ancient world feature scenes in which a child looks into a mirror and sees someone else reflected there, typically a parent. In such scenes, two definitions of the aesthetic coincide: art as a fantastic space that shows an alternate reality and art as a mirror that reflects the world as it is. In early Soviet literature, mirror scenes illuminate the intersection of imagination and economy, yielding new relations destined to replace biological kinship—relations based in food, language, or spirit.

These metaphorical kinships have explanatory force far beyond their context, providing a vantage point onto, for example, the Gothic literature of the early United States and the science fiction discourses of the postwar period. Alternative Kinships will appeal to scholars of Russian literature, comparative literature, and literary theory, as well as those interested in reconciling formalist and materialist approaches to culture.

Jacob Emery was born in Moscow—the small city in Idaho, not the large city in Russia—and is associate professor of Slavic and comparative literature at Indiana University. His work on literature and aesthetics has appeared in venues including Comparative Literature, New Left Review, Science Fiction Studies, and Slavic Review.

“This is an excellent book; it will be very important for the field of Russian studies. Emery is a scholar to watch.”
—Eliot Borenstein, New York University

“Jacob Emery is extremely erudite and summons an impressive array of philosophical and theoretical texts to develop his argumentation, drawing upon a deep knowledge of both Russian and Western European literature. The analyses of individual works are fresh and illuminating.”
—Jenny Kaminer, author of Women with a Thirst for Destruction: The Bad Mother in Russian Culture