Destruction of the Jaguar: From the Books of Chilam Balam (Paperback) 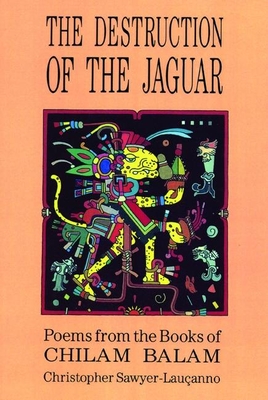 Christopher Sawyer-Laucanno writes in his introduction to Destruction of the Jaguar that The Books of Chilam Balam are the only principal surviving texts of the ancient Maya. Written in the Mayan language but in European script, they are generally considered to be transcriptions and recompilations from memory of material originally contained in the hieroglyphic books, all of which were apparently destroyed by the Spaniards. . . . As they stand now, they are a curious and fascinating combination of prophecy, history, chronology, ritual and mythology.

Here is an English translation that captures the unparalleled beauty of one of the great pre-Columbian masterpieces. This stirring, prophetic poetry haunts our own times.

The Destruction of the Jaguar is Mayan surrealism, dark with jungle shadows and bright with macaw plumage. It is the savage song of a world turned to dust, and in Sawyer-Laucannos voice, it echoes loud and long for the first time in centuries.--Mark Dery, Chicago Tribune

Christopher Sawyer-Lau anno lives in Montague, Massachusetts, with his wife, the poet Patricia Pruitt, and their little white dog, Salty. In 2007 he was guest writer at the first Mussoorie Writers' Festival in India. His books include E.E. Cummings: A Biography (Methuen Publishing, 2005) and The Continual Pilgrimage: American Writers in Paris, 1944-1960 (City Lights, 2001).