The Animals: A Novel (Hardcover) 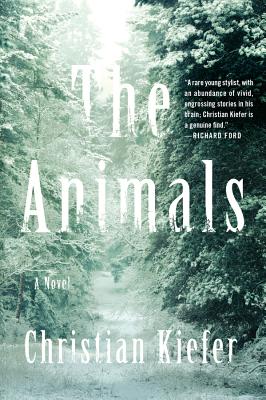 By Christian Kiefer
$25.95
Unavailable, Out of Stock, or Out of Print

For fans of Denis Johnson and Peter Matthiessen, a literary thriller from one of the most exciting new voices in American fiction.

Bill Reed manages a wildlife sanctuary in rural Idaho, caring for injured animals—raptors, a wolf, and his beloved bear, Majer, among them—that are unable to survive in the wild. Seemingly rid of his troubled past, Bill hopes to marry the local veterinarian and live a quiet life together, the promise of which is threatened when a childhood friend is released from prison. Suddenly forced to confront the secrets of his criminal youth, Bill battles fiercely to preserve the shelter that protects these wounded animals and to keep hidden his turbulent, even dangerous, history. Alternating between past and present, Christian Kiefer contrasts the wreckage of Bill’s crime-ridden years in Reno, Nevada, with the elusive promise of a peaceful future. In finely sculpted prose imaginatively at odds with the harsh, volatile world Kiefer evokes, The Animals builds powerfully toward the revelation of Bill’s defining betrayal—and the drastic lengths Bill goes to in order to escape the consequences.

Eloquent and shattering, this novel explores, in gritty detail, how penance sometimes does not lead to redemption, a modern take on the story of Eden. Kiefer is a master wordsmith, and his dense and beautiful language intensifies the pain and isolation of the main character… Devastatingly beautiful. This novel embodies why we write and why we read.
— Kirkus Reviews, Starred Review

A rare young stylist, with an abundance of vivid, engrossing stories in his brain; Christian Kiefer is a genuine find.
— Richard Ford

A mesmerizing literary thriller… there’s a thrilling story line that builds in momentum to an inevitable denouement, paced by prose that’s poetic without ever succumbing to preciousness. This is a compelling, thoughtful novel.
— Publishers Weekly

[The Animals] build[s] to a violent, illuminating climax. Amid the wild backdrop of a blizzard-wracked Idaho winter, Kiefer weaves loyalty, self-destruction, and survival into a story that’s equal doses of raging suspense and thought-provoking gray areas. A great choice for mystery and literary-fiction book groups.

Stretched out on a sun-warmed rock on the most beautiful river I know, on one of the last warm days high in the Sierras, a beer cooling in the water, a galley of Christian Kiefer’s The Animals in my hands six months before the book hits the shelves, no one around to hear me over the roaring water: my exclamations of awe and jealousy at each moment of masterful craftsmanship those pages contain.

In The Animals, Christian Kiefer has created an unusual and compelling amalgam of noir classic—a man’s past comes back to haunt him—and the lyrical extended metaphor in the form of the North Idaho Animal Rescue, where his main character finds refuge and purpose. This tough-minded thriller weaves a hot red thread through an introspective, sensuous landscape, a meditation on instinct, memory and the nature of friendship between species and between men.

— Janet Fitch, author of Paint it Black and White Oleander

Kiefer… is a gifted stylist unafraid of writing on the edge of sentiment…. Beautifully written… The Animals moves at a heart-quickening pace, and the counterpointed stories frequently intersect and gather a fierce momentum… The book is not just a galloping great read; it’s a violent, tender, terrifying, genuine work of art.

Don’t let The Animals get past you…. It’s a haunting, darkly exquisite piece of rural noir that will chill you from its somewhat sedate beginning to its apocalyptic-like ending…. I couldn’t read the novel fast enough, yet there were passages that I made myself read over and over again. You must read what is sure to be on many ‘Best of’ lists for 2015.

The deep, dense prose Kiefer uses makes you slow down and take it all in. Word by word and sentence by sentence, Kiefer reels the reader into his world.
— Heather Bobula - The Life Sentence