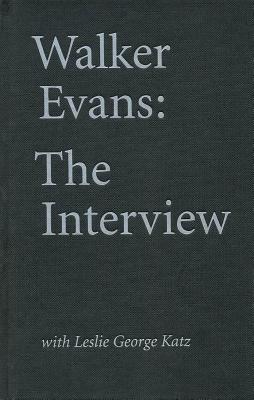 Walker Evans in his own words: the legendary interview, back in print

In 1971, Art in America published an interview with Walker Evans conducted by Leslie George Katz, writer and publisher of the Eakins Press.

The interview is charming and illuminating in its clarity and candor. Nearing the end of his life, Evans speaks freely about his influences and how he got started as a photographer ("I was damn well going to be an artist and I wasn't going to be a businessman," he remembers), and reflects back on his work and his thinking. The interview has become legendary, consulted by curators, scholars and students for half a century and considered a definitive source for insights into the process, philosophy and personality of one of America's greatest photographers. In 1995, the Eakins Press Foundation republished Evans' interview in a deluxe clothbound edition titled Walker Evans Incognito. More than 20 years later, this new edition brings the Evans interview back into print in an elegant and affordable volume for a new generation. Walker Evans scholar Anne Bertrand introduces the interview and its publication history, and contributes notes throughout the text that provide important contextual information. Walker Evans: The Interview offers an opportunity to rediscover the man behind the famous images, in his own words. Born in St. Louis, Missouri, Walker Evans (1903-75) took up photography in 1928. His book collaboration with James Agee, Let Us Now Praise Famous Men (1941), which portrayed the lives of three white tenant families in southern Alabama during the Depression, has become one of that era's most defining documents. Evans joined the staff of Time magazine in 1945, and shortly after moved to Fortune magazine, where he stayed until 1965. That year, he became a professor of photography at the Yale University School of Art. Evans died at his home in Old Lyme, Connecticut, in 1975. Leslie George Katz (1918-97) was the founder and publisher of the Eakins Press Foundation. Until his death in 1997, he wrote extensively about American art and culture, and through his sustained efforts to celebrate his heroes--Thomas Eakins, Walt Whitman, and Walker Evans--found a way to define a new sort of democratic, patriotic intellectualism.