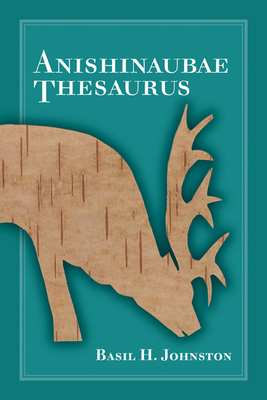 The Anishinaubae (Chippewa/Ojibwe) language has a beauty in the spoken word, a deliberate rhythm, simplicity, and mysterious second meanings. When Basil Johnston began teaching the Anishinaubae language, in the late 1960s, there were no related manuals or dictionaries that were suitable for beginners. To fill this void, Johnston wrote a language course and a lexicon to fill for the course materials. Now he has broadened this labor by compiling Anishinaubae Thesaurus, which goes even further to fill a deep cultural and linguistic void. This thesaurus contains a useful sampling of the 400,000 words that comprise the Anishinaubae language, and it is intended to be a practical reference tool for teachers, translators, interpreters, and orthographers.

Basil H. Johnston is a member of the Anishinaubae Nation. He was born on the Parry Island Reserve in central Northern Ontario and studied at Loyola College in Montréal, Quebec. Johnston has devoted much of his time to preserving the culture and traditions of his Anishinaubae people through his writing about traditional legends and stories. He has published more than a dozen books and twenty articles in the United States, Canada, and Germany; and received many honors and awards. In addition, Johnston has been a lecturer in the ethnology department at the Royal Ontario Museum in Toronto.