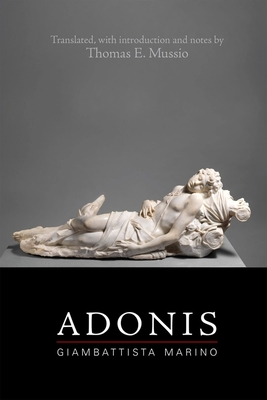 This is the first complete translation in English of Giambattista Marino’s Adone, a poem of 20 cantos written in Italian and first published in 1623 in Paris. Although Marino’s work has been characterized as a mythological poem with the tragic tale of Venus and Adonis at its core and woven through with retellings of many Greek and Roman myths, it is clear that Marino strove to write more than an Italian version of Ovid’s Metamorphoses. The highly wrought descriptive passages that permeate the poem, the allusions to contemporary political figures and events, and the rich scientific, philosophical, and theological language of many passages reflect Marino’s particular poetic style, his broad interests, and his engagement with the political and intellectual scene of early seventeenth-century Europe. One of the goals of this translation is to provide a highly accessible version of the whole poem and to expand its readership to include not only students and scholars of the romance epic and the early modern period but also curious general readers. It is hoped that this modern, annotated translation will spur new research on Marino’s poem and bear new assessments of the poem’s relation to its sources, of its influence on later literature, and of its vital connection with key issues of Marino’s time, such as scientific advancement, discovery and exploration, and the power and influence of the Catholic Church.

Translated, with introduction and notes by Thomas E. Mussio.

Thomas E. Mussio is Professor of Italian at Iona College. His research interests include medieval and early modern Italian poetry, the relation between philosophy and literature, and comparative literature. In addition to his work on Marino’s Adone, he has published numerous critical articles on Dante’s Divine Comedy, Petrarch’s Canzoniere, and Michelangelo’s Rime.