An Offer We Can't Refuse: The Mafia in the Mind of America (Paperback) 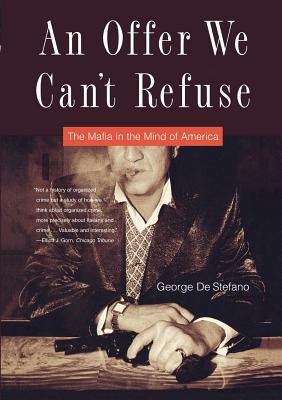 A provocative and entertaining look at the mafia, the media, and the (un)making of Italian Americans.

As evidenced in countless films, novels, and television portrayals, the Mafia has maintained an enduring hold on the American cultural imagination--even as it continues to wrongly color our real-life perception of Italian Americans. In An Offer We Can't Refuse, George De Stefano takes a close look at the origins and prevalence of the Mafia mythos in America.

Beginning with a consideration of Italian emigration in the early twentieth century and the fear and prejudice--among both Americans and Italians--that informed our earliest conception of what was at the time the largest immigrant group to enter the United States, De Stefano explores how these impressions laid the groundwork for the images so familiar to us today and uses them to illuminate and explore the variety and allure of Mafia stories--from Coppola's romanticized paeans to Scorsese's bloody realism to the bourgeois world of David Chase's Sopranos--while discussing the cultural richness often contained in these works.

De Stefano addresses the lingering power of the goodfella cliché and the lamentable extent to which it is embedded in our consciousness, making it all but impossible to green-light a project about the Italian American experience not set in gangland.

"Invites Italian-Americans of all backgrounds to the family table to discuss how mob-related movies and television shows have affected the very notion of what their heritage still means in the 21st century." -- Allen Barra, The New York Sun

George De Stefano is a journalist and critic who has written extensively on culture for numerous publications, including The Nation, Film Comment, and Newsday.

"Invites Italian-Americans of all backgrounds to the family table to discuss how mob-related movies and television shows have affected the very notion of what their heritage still means in the 21st century." —Allen Barra, The New York Sun

"A detailed, textured meditation. Whether De Stefano is summarizing causes of 19th-century Italian immigration, sketching the Mafia's origin in Sicily, or dissecting the appeal of Hollywood mobster characters, he catches links to evolving capitalism, discomfort with modern society, psychological urges for strong father figures, and other complex topics not usually addressed by opponents of Mafia pop culture. [De Stefano] provokes hard thought about why the Mafia, to the exclusion of almost every other dimension of Italian American life, stays lodged in ‘the Mind of America.'" —Carlin Romano, The Philadelphia Inquirer

"Not a history of organized crime but a study of how we think about organized crime, more precisely about Italians and crime. . . Valuable and interesting." —Elliott J. Gorn, Chicago Tribune

“Finally, a book that helps to explain America's enduring fascination with the mythology of the Mafia. For anyone who's interested in the subject, An Offer We Can't Refuse is essential reading--thoughtful, informative, entertaining, and most of all, even-handed.” —John Turturro