Animation Behind the Iron Curtain (Paperback) 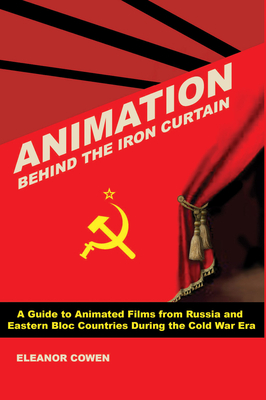 Animation Behind the Iron Curtain is a journey of discovery into the world of Soviet era animation from Eastern Bloc countries. From Jerzy Kucia's brutally exquisite Reflections in Poland to the sci-fi adventure of Ott in Space by Estonian puppet master Elbert Tuganov to the endearing Gopo's little man by Ion Popescu-Gopo in Romania, this excursion into Soviet era animation brings to light magnificent art, ruminations on the human condition, and celebrations of innocence and joy.

As art reveals the spirit of the times, animation art of Eastern Europe during the Cold War, funded by the Soviet states, allowed artists to create works illuminating to their experiences, hopes, and fears. The political ideology of the time ironically supported these artists while simultaneously suppressing more direct critiques of Soviet life. Politics shaped the world of these artists who then fashioned their realities into amazing works of animation. Their art is integral to the circumstances in which they lived, which is why this book combines the unlikely combination of world politics and animated cartoons.

The phenomenal animated films shared in this book offer a glimpse into the culture and hearts of Soviet citizens who grew up with characters as familiar and beloved to them as Mickey Mouse and Bugs Bunny are to Americans. This book lays out the basic political dynamics of the Cold War and how those political tensions affected the animation industry in both the US and in the Eastern Bloc. And, for animation novices and enthusiasts alike, Animation Behind the Iron Curtain also offers breakout sections to explain many of the techniques and aesthetic considerations that go into this fascinating art form. This book is a must read for anyone interested in the Cold War era and really cool animated films

Eleanor Cowen teaches History and Art of Animation and other film related courses at the University of North Carolina at Greensboro. Prior to teaching, she worked in editing and sound design for National Geographic Television and Discovery Communications. Her current areas of interest include film aesthetics and Eastern European animation.