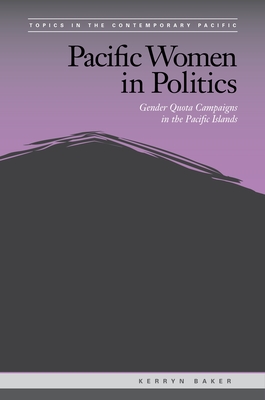 Women are significantly underrepresented in politics in the Pacific Islands, given that only one in twenty Pacific parliamentarians are female, compared to one in five globally. A common, but controversial, method of increasing the number of women in politics is the use of gender quotas, or measures designed to ensure a minimum level of women's representation. In those cases where quotas have been effective, they have managed to change the face of power in previously male-dominated political spheres.

How do political actors in the Pacific islands region make sense of the success (or failure) of parliamentary gender quota campaigns? To answer the question, Kerryn Baker explores the workings of four campaigns in the region. In Samoa, the campaign culminated in a "safety net" quota to guarantee a minimum level of representation, set at five female members of Parliament. In Papua New Guinea, between 2007 and 2012 there were successive campaigns for nominated and reserved seats in parliament, without success, although the constitution was amended in 2011 to allow for the possibility of reserved seats for women. In post-conflict Bougainville, women campaigned for reserved seats during the constitution-making process and eventually won three reserved seats in the House of Representatives, as well as one reserved ministerial position. Finally, in the French Pacific territories of New Caledonia, French Polynesia, and Wallis and Futuna, Baker finds that there were campaigns both for and against the implementation of the so-called "parity laws." Baker argues that the meanings of success in quota campaigns, and related notions of gender and representation, are interpreted by actors through drawing on different traditions, and renegotiating and redefining them according to their goals, pressures, and dilemmas. Broadening the definition of success thus is a key to an understanding of realities of quota campaigns. Pacific Women in Politics is a pathbreaking work that offers an original contribution to gender relations within the Pacific and to contemporary Pacific politics.

Kerryn Baker is a research fellow in Pacific politics with the Department of Pacific Affairs at the Australian National University.