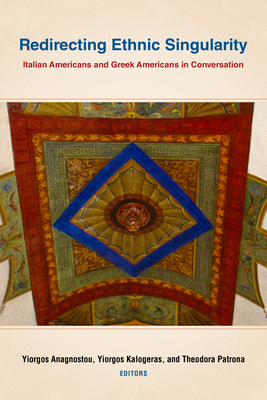 Promotes the understanding of Italian Americans and Greek Americans through the study of their interactions and juxtapositions.

Redirecting Ethnic Singularity: Italian Americans and Greek Americans in Conversation contributes to U.S. ethnic and immigration studies by bringing into conversation scholars working in the fields of Italian American and Greek American studies in the United States, Europe, and Australia. The work moves beyond the "single group" approach--an approach that privileges the study of ethnic singularity--to explore instead two ethnic groups in relation to each other in the broader context of the United States. The chapters bring into focus transcultural interfaces and inquire comparatively about similarities and differences in cultural representations associated with these two groups. This co-edited volume contributes to the fields of transcultural and comparative studies. The book is multi-disciplinary. It features scholarship from the perspectives of architecture, ethnomusicology, education, history, cultural and literary studies, and film studies, as well as whiteness studies. It examines the production of ethnicity in the context of American political culture as well as that of popular culture, including visual representations (documentary, film, TV series) and "low brow" crime fiction. It includes analysis of literature. It involves comparative work on religious architecture, transoceanic circulation of racialized categories, translocal interconnections in the formation of pan-Mediterranean identities, and the making of the immigrant past in documentaries from Italian and Greek filmmakers. This volume is the first of its kind in initiating a multidisciplinary transcultural and comparative study across European Americans.

Yiorgos Anagnostou (Edited By, Introduction and notes by) Yiorgos Anagnostou is Professor and the Director of the Modern Greek Program at The Ohio State University. He is the author of Contours of White Ethnicity: Popular Ethnography and the Making of Usable Pasts in Greek America. Yiorgos D. Kalogeras (Edited By, Introduction and notes by) Yiorgos D. Kalogeras is Professor Emeritus of American ethnic and minority literature. He taught until his retirement (2018) at the Department of English Aristotle at University of Thessaloniki, Greece. He is the author, co-author, or editor of twelve books. Theodora Patrona (Edited By, Introduction and notes by) Theodora Patrona is affiliated with the School of English of the Aristotle University of Thessaloniki Greece, as Special Teaching Fellow (EDIP). She is the author of Return Narratives: Ethnic Space in Late-Twentieth-Century Greek American and Italian American Literature.