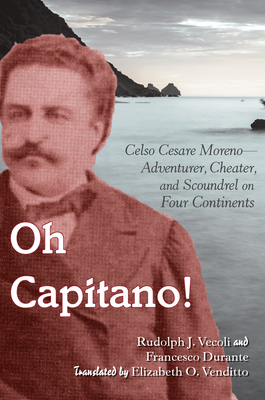 The story of Celso Cesare Moreno, one of the most famous of the emigrant Italian elites or prominenti. Moreno traveled the world lying, scheming, and building an extensive patron/client network to to establish his reputation as a middleman and person of significance. Through his machinations, Moreno became a critical player in the expansion of western trade and imperialism in Asia, the trafficking of migrant workers and children in the Atlantic, and the conflicts of Americans and natives over the fate of Hawaii, and imperial competitions of French, British, Italian and American governments during a critically important era of imperial expansion.

Rudolph J. Vecoli (Author) Rudolph J. Vecoli (deceased) was director of the Immigration History Research Center at the University of Minnesota. Francesco Durante (Author) Francesco Durante is a journalist as well as Professor of literature at the University of Suor Orsola Benincasa as part of the Program in Modern Languages and Culture. Donna R. Gabaccia (Edited By) Donna R. Gabaccia is professor of history at University of Toronto and scholar of international migration, gender and food studies. She has written and edited fifteen books on U.S. immigration, migration in world history, and the history of the worldwide Italian diaspora.