To Risk It All: General Forbes, the Capture of Fort Duquesne, and the Course of Empire in the Ohio Country (Hardcover) 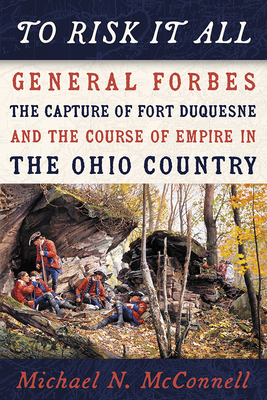 General John Forbes’s campaign against Fort Duquesne was the largest over-land expedition during the Seven Years’ War in America. While most histories of the time period include the Forbes Campaign as an aside, McConnell documents how and why Forbes and his army succeeded, and what his success meant to the subsequent history of the mid-Atlantic colonies, native inhabitants of the Ohio Country, and the empire he represented.

A close look at the Forbes Campaign and its personnel reveals much about both British relations with native peoples and the nature of Britain’s American empire during a time of stress. Unlike other campaigns, this one was composed largely of colonial—not professional British—troops. In addition, individual colonies negotiated their role in the campaign and frequently placed their own local interests ahead of those of the empire as a whole. The campaign thus suggests the limits of imperial power and how Britain’s hold over its American frontiers was, at best, tenuous and helped lead to an eventual break-down of empire in the 1760s and 1770s.

Michael N. McConnell is associate emeritus professor of history at University of Alabama at Birmingham and the author of A Country Between: The Upper Ohio Valley and Its Peoples, 1724-1774 and Army and Empire: British Soldiers on the American Frontier, 1758-1775.

“In this detailed and fast-paced narrative, the Forbes campaign of 1758 finally gets the respect it deserves. By reconstructing the experiences, objectives, and discontents of British troops, provincial soldiers, Native Americans, civilians, and camp followers, Michael McConnell reveals the multi-leveled complexity involved in executing an eighteenth-century European military operation in a contested North American borderland.”—Timothy Shannon, Gettysburg College


“This brilliant study establishes Forbes’s expedition as a decisive event of the Seven Years’ War in America. Michael McConnell argues that the general’s singular embrace of native diplomacy through the Quaker-brokered Treaty of Easton peaceably ended the border war while Forbes methodically marched on Fort Duquesne. With impressive scholarship and clear prose, this book is highly recommended.”—Martin West, former director of Fort Ligonier and editor of Bouquet’s Expedition against the Ohio Indians in 1764