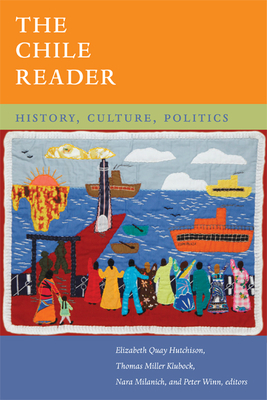 By Elizabeth Quay Hutchison (Editor), Thomas Miller Klubock (Editor), Nara B. Milanich (Editor)
$119.95
Unavailable, Out of Stock, or Out of Print

The Chile Reader makes available a rich variety of documents spanning more than five hundred years of Chilean history. Most of the selections are by Chileans; many have never before appeared in English. The history of Chile is rendered from diverse perspectives, including those of Mapuche Indians and Spanish colonists, peasants and aristocrats, feminists and military strongmen, entrepreneurs and workers, and priests and poets. Among the many selections are interviews, travel diaries, letters, diplomatic cables, cartoons, photographs, and song lyrics.

Texts and images, each introduced by the editors, provide insights into the ways that Chile's unique geography has shaped its national identity, the country's unusually violent colonial history, and the stable but autocratic republic that emerged after independence from Spain. They shed light on Chile's role in the world economy, the social impact of economic modernization, and the enduring problems of deep inequality. The Reader also covers Chile's bold experiments with reform and revolution, its subsequent descent into one of Latin America's most ruthless Cold War dictatorships, and its much-admired transition to democracy and a market economy in the years since dictatorship.