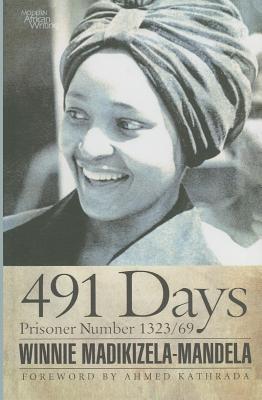 By Winnie Madikizela-Mandela, Ahmed Kathrada (Foreword by)
This Book Is Not Sold Online - Inquire In Store
Out of Print

On a freezing winter’s night, a few hours before dawn on May 12, 1969, South African security police stormed the Soweto home of Winnie Madikizela-Mandela, activist and wife of the imprisoned Nelson Mandela, and arrested her in the presence of her two young daughters, then aged nine and ten.

Rounded up in a group of other antiapartheid activists under Section 6 of the Terrorism Act, designed for the security police to hold and interrogate people for as long as they wanted, she was taken away. She had no idea where they were taking her or what would happen to her children. For Winnie Mandela, this was the start of 491 days of detention and two trials.

Forty-one years after Winnie Mandela’s release on September 14, 1970, Greta Soggot, the widow of one of the defense attorneys from the 1969–70 trials, handed her a stack of papers that included a journal and notes she had written while in detention, most of the time in solitary confinement. Their reappearance brought back to Winnie vivid and horrifying memories and uncovered for the rest of us a unique and personal slice of South Africa’s history.

491 Days: Prisoner Number 1323/69 shares with the world Winnie Mandela’s moving and compelling journal along with some of the letters written between several affected parties at the time, including Winnie and Nelson Mandela, himself then a prisoner on Robben Island for nearly seven years.

Readers will gain insight into the brutality she experienced and her depths of despair, as well as her resilience and defiance under extreme pressure. This young wife and mother emerged after 491 days in detention unbowed and determined to continue the struggle for freedom.

Winnie Madikizela-Mandela lives in Orlando West, Soweto, South Africa, where she continues her activism and political service, currently on the National Executive Committee of the African National Congress.

“In 1969, five years after Nelson Mandela was sentenced to life imprisonment for sabotage, Winnie Mandela was rounded up with other anti-apartheid activists and jailed for 16 months. The journal she kept during her imprisonment forms half of this book; the other half consists of letters by Nelson to his wife, daughters, relatives and prison officials. Throughout, the author documents sadistic maltreatment: a diet consisting mainly of insect-infested porridge, filthy cells, and, for many prisoners, daily beatings…. Taken together, these documents afford a chilling perspective on the Mandelas’ personal and political struggles.”—Kirkus Reviews

“For many years, Winnie Mandela was herself an icon who courageously resisted harassment and abuse by South African authorities, and was every inch the freedom fighter her husband was…. Between Mandela’s measured lines—or embedded in them—is a fury and a steely faith that justice and the will of the people will eventually win the day…. Love—of family, of ideals—does not conquer all, but as this book memorably demonstrates, it is often the only thing standing between us and the abyss.”—Ms. Magazine

“Winnie Madikizela-Mandela’s more recent years have left her image tainted. But in her new book, a collection of letters and diary entries from her 491 days in prison, is a powerful reminder of what she was best known for.… These give a gripping insight into a family trying to survive under an onslaught from the regime. But in the journal and the letters, the couple’s fierce resistance burns through.”—Mail & Guardian, South Africa