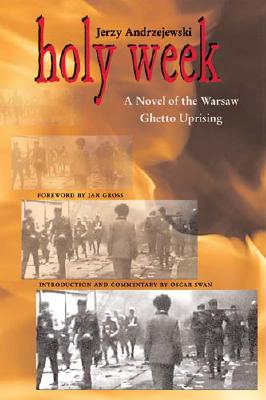 By Jerzy Andrzejewski, Jan Gross (Foreword by), Oscar E. Swan (Introduction by)
This Book Is Not Sold Online - Inquire In Store

At the height of the Nazi extermination campaign in the Warsaw Ghetto, a young Jewish woman, Irena, seeks the protection of her former lover, a young architect, Jan Malecki. By taking her in, he puts his own life and the safety of his family at risk. Over a four-day period, Tuesday through Friday of Holy Week 1943, as Irena becomes increasinglytraumatized by her situation, Malecki questions his decision to shelter Irena in the apartment where Malecki, his pregnant wife, and his younger brotherreside. Added to his dilemma is the broader context of Poles attitudes toward the Jewish question and the plight of the Jews locked in the ghetto duringthe final moments of its existence.
Few fictional works dealing with the war have been written so close in time to the events that inspired them. No other Polish novel treats the range of Polish attitudes toward the Jews with such unflinching honesty.
Jerzy Andrzejewski's Holy Week (Wielki Tydzien, 1945), one of the significant literary works to be published immediately following the Second World War, now appears in English for the first time.
This translation of Andrzejewski's Holy Week began as a group project in an advanced Polish language course at the University of Pittsburgh. Class members Daniel M. Pennell, Anna M. Poukish, and Matthew J. Russin contributed to the translation; the instructor, Oscar E. Swan, was responsible for the overall accuracy and stylistic unity of the translation as well as for the biographical and critical notes and essays.

Best known for his novel Ashes and Diamonds, Jerzy Andrzejewski (19091983) gained a reputationas a writer of moral conflict. In 1949 he was electedpresident of the Polish Writers Union, but he resigned in 1957 as a protest against government censorship. Later he was a founding member of theintellectual opposition group KOR."