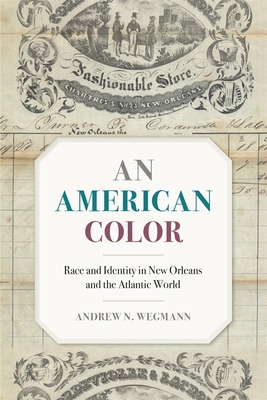 For decades, scholars have conceived of the coastal city of New Orleans as a remarkable outlier, an exception to nearly every "rule" of accepted U.S. historiography. A frontier town of the circum-Caribbean, the popular image of New Orleans has remained a vestige of North America's European colonial era rather than an Atlantic city on the southern coast of the United States.

Beginning with the French founding of New Orleans in 1718 and concluding with the outbreak of the American Civil War in 1861, An American Color seeks to correct this vision. By tracing the impact of racial science, law, and personal reputation and identity through multiple colonial and territorial regimes, it shows how locally born mul tres in French New Orleans became part of a self-conscious, identifiable community of Creoles of color in the United States. An American Color places this local history in the wider context of the North American continent and the Atlantic world. This book shows that New Orleans and its free population of color did not develop in a cultural, legal, or intellectual vacuum. More than just a study of race and law, this work tells a story of humanity in the Atlantic world, a story of how a people on the French colonial frontier in the mid-eighteenth century became unlikely, accepted parts of a vast political, social, and racial United States without ever leaving home.

ANDREW N. WEGMANN is associate professor of history at Delta State University, where he teaches classes on the early American republic and the Atlantic world. He is coauthor, with Sara K. Eskridge, of U.S. History: A Top Hat Interactive Text and coeditor, with Robert Englebert, of French Connections: Cultural Mobility in North America and the Atlantic World. A native of New Orleans, he lives in Cleveland, Mississippi.