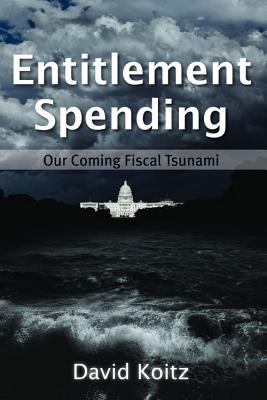 By David Koitz
$19.95
Unavailable, Out of Stock, or Out of Print

Our emerging dilemma-how will we climb a mountain of entitlement debt?

The federal government is today facing the largest fiscal challenge since World War II. The fundamental question before the nation is whether the fiscal course the government is on can continue. In Entitlement Spending: Our Coming Fiscal Tsunami, David Koitz argues that it is not a Democratic or Republican problem; it is an American problem. As it comes ever closer, he contends, the need for political convergence becomes ever more pressing. Written so as to make the issues understandable to nonexperts, the book is designed to raise public awareness of the urgency to act by clarifying misconceptions and presenting the facts on the impending economic crisis driven by the federal government's enormous spending on entitlement programs. Although Medicare, Medicaid, and Social Security are idolized as pillars of the nation's safety net, he shows why those programs are in fact the largest drivers of our looming fiscal problem. He explains how, if an effective remedy is to emerge, those programs must contribute heavily to the changes lawmakers consider and offers various policy directions for reining in their spending.

Koitz suggests, for instance, that increasing out-of-pocket spending by health care consumers may be the only effective way to sensitize both medical providers and patients to the costs of care, contending that, regardless of how this may affect utilization or medical practices, major limits are needed in Medicare and Medicaid expenditures because they have become unaffordable. Whether by raising the Medicare eligibility age above sixty-five, imposing higher deductibles and co-payments, or converting Medicare to a program supporting the purchase of health insurance in the private market, the program's expenditures must be reined in and the expectations of future Medicare recipients balanced against the risks of a governmental debt calamity. For Social Security, he says, the public must understand that much of the system's financial problems are due to the large gains in longevity since the system's inception in the 1930s and the much larger lifetime benefits now being paid to current retirees and projected to be paid to future generations. Social Security too, he contends, needs major constraints, many of which have long lingered and are well understood on Capitol Hill; what is lacking is political courage.

He emphasizes that the nation's long-term economic outlook is now predicated on issuing an unsustainable amount of debt and that for policy makers to ignore that condition and the things creating it, or to pass the buck to future generations to make the hard choices, is simply irresponsible. He concludes "it's not courage to make clear what for decades was opaque. It's not courage to act responsibly and do what's seemingly hard. It's statesmanship. It's about the real job of legislating."

David Koitz is a consultant involved with a variety of public policy matters. Over a long career as an analyst on Capitol Hill, he worked for numerous members of Congress and various congressional committees.

David Koitz is a consultant involved with a variety of public policy matters. Over a long career as an analyst on Capitol Hill, he worked for numerous members of Congress and various congressional committees. Born in Springfield, Massachusetts, he attended the University of Massachusetts and the American University.