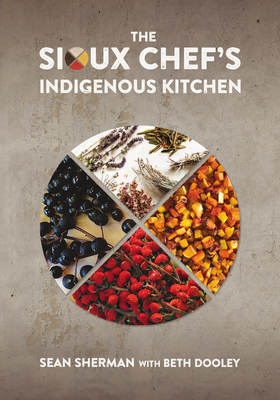 Named one of the Best Cookbooks of 2017 by NPR, The Village Voice, Smithsonian Magazine, UPROXX, New York Magazine, San Francisco Chronicle, Mpls. St. PaulMagazine and others

Here is real food—our indigenous American fruits and vegetables, the wild and foraged ingredients, game and fish. Locally sourced, seasonal, “clean” ingredients and nose-to-tail cooking are nothing new to Sean Sherman, the Oglala Lakota chef and founder of The Sioux Chef. In his breakout book, The Sioux Chef’s Indigenous Kitchen, Sherman shares his approach to creating boldly seasoned foods that are vibrant, healthful, at once elegant and easy.

The Sioux Chef’s Indigenous Kitchen is a rich education and a delectable introduction to modern indigenous cuisine of the Dakota and Minnesota territories, with a vision and approach to food that travels well beyond those borders.

Chef Sean Sherman was born in Pine Ridge, South Dakota, and has been cooking in Minnesota, South Dakota, and Montana for the past twenty-seven years. He works as a caterer and food educator across the country through his business The Sioux Chef, based in South Minneapolis. He has earned plaudits and profiles in such venues as National Public Radio, Guardian UK, Saveur, and the New York Times.

Beth Dooley is author of many award-winning cookbooks, including Savory Sweet: Simple Preserves from a Northern Kitchen, Minnesota’s Bounty: The Farmers Market Cookbook, and The Birchwood Cafe Cookbook, all published by the University of Minnesota Press. She has also written a memoir, In Winter’s Kitchen: Growing Roots and Breaking Bread in the Northern Heartland.

"The Sioux Chef’s Indigenous Kitchen is inspired and important. Sean Sherman and his team remake indigenous cuisine and in doing so show us all a new way to relate to food. This book and what it offers is nothing short of thrilling."—David Treuer

"Sean Sherman is doing some of the most important culinary work in America. In The Sioux Chef's Indigenous Kitchen, he takes a forward-thinking approach to indigenous cuisine, bringing his culture into the light to share with the rest of the world."—Sean Brock, James Beard Award Winner, author of Heritage, and Executive Chef Husk, Charleston, SC

"I am impressed by Chef Sean Sherman’s dedication to a cuisine that has long been lost: his respect for his heritage and his passion to bring the beauty of this tradition into the world. This is remarkable work and I look forward to learning from this talented chef!"—Maneet Chauhan, Food Network Celebrity Chef, Founder CEO, Indie Culinaire

"The expansive book is a goldmine of ingredients and techniques at once familiar and unusual to the average non-Native Minnesotan."—City Pages

"An edible connection to the gifts of this land—and a celebration of the culinary culture of its indigenous people."—The Washington Post

"It’s not every day one finds an excellent cookbook devoted to an indigenous American cuisine, which is why The Sioux Chef’s Indigenous Kitchen by Sean Sherman is such a treat."—Smithsonian Magazine

"More than just a cookbook, this is an act of reclamation of Native Americans' history – and their future."—National Public Radio/NPR

"I admire Sherman’s dedication to continually learning, educating others, and innovating on native cuisine before it is lost to us."—New York Magazine

"The Sioux Chef provides food for thought as well as for the body. The recipes will teach cooks everywhere how to pay attention to the world around them for sources of ingredients and how to prepare those ingredients. The personal stories—the wisdom they share—will teach all readers about sustainable living—the interdependence of beings, living with the earth instead of on the earth."—Indian Country Today

"There are cookbooks from which one simply cooks the recipes, and cookbooks from which one learns how and why to cook. Chef Sherman’s book is in the latter. It is a cookbook meant to be studied, one where the recipes are not its most important feature, but rather a part of an overall call to reclaim the history and culture of indigenous peoples. Chef Sherman observes that controlling food is a means of controlling power. With this cookbook, he is taking that power and giving it back to its rightful owners."—Foreword Reviews, starred review

"The Sioux Chef’s Indigenous Kitchen offers more than just delicious recipes—it offers empowering historical, cultural, and environmental lessons that may hold a key to our future."—Permaculture

"Sherman appears less a culinary historian than an avant-garde chef. He succeeds in making authentic Native American cuisine approachable for the home cook."—Booklist

"This is an illuminating guide to Native American food that will enthrall home cooks and food historians alike."—Publishers Weekly

"He looks at the relationship of food and American Indians in the Midwest in his first book, written with local author Beth Dooley, The Sioux Chef’s Indigenous Kitchen"—Star Tribune

"In this book, he shares his approach to creating boldly seasoned foods that are vibrant and healthful."—Duluth News-Tribune

"From the very first page of what is arguably one of the most important cookbooks of the year."—Cowboys and Indians

"This is the heritage that chef Sean Sherman is reviving through a language we all understand—food. With a cookbook, Sherman is challenging our definition of ‘local’ food by bringing indigenous cooking back to Minnesota."—Minnesota Monthly

"Readers willing to venture beyond the bounds of convenience cooking can learn much from this thoughtful title. Highly recommended for food history collections." —Library Journal