What Would Animals Say If We Asked the Right Questions? (Posthumanities #38) (Paperback) 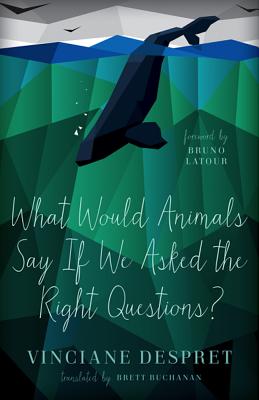 By Vinciane Despret, Brett Buchanan (Translated by)
This Book Is Not Sold Online - Inquire In Store

This is book number 38 in the Posthumanities series.

“You are about to enter a new genre, that of scientific fables, by which I don’t mean science fiction, or false stories about science, but, on the contrary, true ways of understanding how difficult it is to figure out what animals are up to.” —Bruno Latour, form the Foreword

Is it all right to urinate in front of animals? What does it mean when a monkey throws its feces at you? Do apes really know how to ape? Do animals form same-sex relations? Are they the new celebrities of the twenty-first century? This book poses twenty-six such questions that stretch our preconceived ideas about what animals do, what they think about, and what they want.

In a delightful abecedarium of twenty-six chapters, Vinciane Despret argues that behaviors we identify as separating humans from animals do not actually properly belong to humans. She does so by exploring incredible and often funny adventures about animals and their involvements with researchers, farmers, zookeepers, handlers, and other human beings. Do animals have a sense of humor? In reading these stories it is evident that they do seem to take perverse pleasure in creating scenarios that unsettle even the greatest of experts, who in turn devise newer and riskier hypotheses that invariably lead them to conclude that animals are not nearly as dumb as previously thought.

These deftly translated accounts oblige us, along the way, to engage in both ethology and philosophy. Combining serious scholarship with humor that will resonate with anyone, this book—with a foreword by noted French philosopher, anthropologist, and sociologist of science Bruno Latour—is a must not only for specialists but also for general readers, including dog owners, who will never look at their canine companions the same way again.

Vinciane Despret is associate professor of philosophy at University of Liège and Free University of Brussels. Her eight books include Women Who Make a Fuss (with Isabelle Stengers) and Our Emotional Makeup.

Brett Buchanan is director of the School of the Environment and associate professor of philosophy and environmental studies at Laurentian University, Canada.

Bruno Latour is a french philosopher, anthropologist, and sociologist of science.

"Many philosophers have considered the issue of animal rights, but Despret considerably broadens the range of moral and philosophical concerns in this field."—CHOICE