Erotics of Sovereignty: Queer Native Writing in the Era of Self-Determination (Paperback) 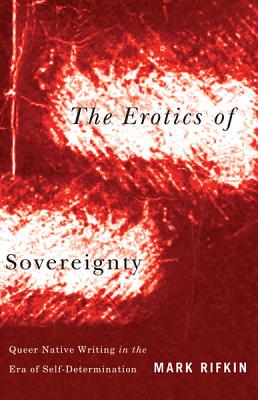 In 1970 the Nixon administration inaugurated a new era in federal Indian policy. No more would the U.S. government seek to deny and displace Native peoples or dismantle Native governments; from now on federal policy would promote “the Indian’s sense of autonomy without threatening his sense of community.”

In The Erotics of Sovereignty, Mark Rifkin offers a telling perspective on what such a policy of self-determination has meant and looks at how contemporary queer Native writers use representations of sensation to challenge official U.S. accounts of Native identity. Rifkin focuses on four Native writers—Qwo-Li Driskill (Cherokee), Deborah Miranda (Esselen), Greg Sarris (Graton Rachería), and Chrystos (Menominee)—approaching their fiction and poetry as forms of political theory.

Mark Rifkin is associate professor of English at the University of North Carolina at Greensboro.