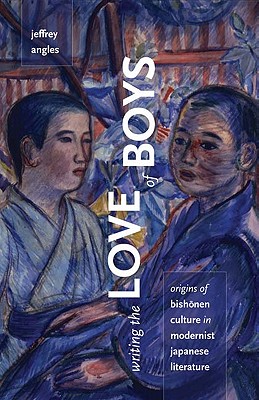 Despite its centuries-long tradition of literary and artistic depictions of love between men, around the fin de siècle Japanese culture began to portray same-sex desire as immoral. Writing the Love of Boys looks at the response to this mindset during the critical era of cultural ferment between the two world wars as a number of Japanese writers challenged the idea of love and desire between men as pathological.
Jeffrey Angles focuses on key writers, examining how they experimented with new language, genres, and ideas to find fresh ways to represent love and desire between men. He traces the personal and literary relationships between contemporaries such as the poet Murayama Kaita, the mystery writers Edogawa Ranpo and Hamao Shiro, the anthropologist Iwata Jun’ichi, and the avant-garde innovator Inagaki Taruho.
Writing the Love of Boys shows how these authors interjected the subject of male–male desire into discussions of modern art, aesthetics, and perversity. It also explores the impact of their efforts on contemporary Japanese culture, including the development of the tropes of male homoeroticism that recur so often in Japanese girls’ manga about bishonen love.

"Writing the Love of Boys makes an important contribution to the study of sexuality in modern Japan. Jeffrey Angles thoughtfully examines the representation of male-male sexuality in the work of three prewar Japanese writers, offering insightful commentary on the specific features of how each writer depicts male-male desire and uses their texts as a lens through which to explore larger currents in the literary and sexual culture of the time." —Jim Reichert, author of In the Company of Men: Representations of Male-Male Sexuality in Meiji Literature

"Angles vividly resurrects a current of Japanese literary modernism—namely, its estheticization of the ‘love of boys’—that previous narratives have obscured. From the perspective of queer history and culture the trio of authors on whom he focuses—Kaita, Ranpo, Taruho—form a fascinating and lastingly influential lineage." —Gregory Pflugfelder, Columbia University