The Beloved Border: Humanity and Hope in a Contested Land (Paperback) 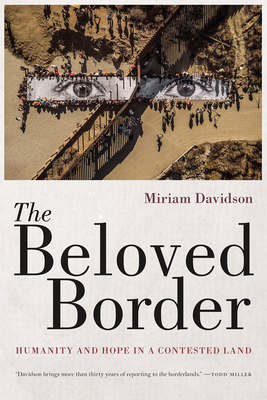 Kids in cages, family separations, thousands dying in the desert. Police violence and corruption. Environmental devastation. These are just some of the dramatic stories recounted by veteran journalist Miriam Davidson in The Beloved Border. This groundbreaking work of original reporting also gives hope for the future, showing how border people are responding to the challenges with compassion and creativity.

The book draws on a variety of sources to explain how border issues intersect and how the current situation, while made worse under the Trump administration, is in fact the result of decades of prohibition, crackdowns, and wall building on the border. Davidson addresses subjects such as violence in Mexico, particularly against the press; cross-border gun smuggling and legal gun sales; the rise in migrant detentions, deportations, and deaths since the crackdown began; controversy over humanitarian aid in the desert; border patrol crimes and abuses; and the legal, ethical, and moral issues raised by increased police presence and militarization on the border. The book also looks at the environmental impact of wall building and construction of a planned copper mine near Tucson, especially on the jaguar and other endangered species.

Davidson shares the history of sanctuary and argues that this social movement and others that have originated on the border are vanguards of larger global movements against the mistreatment of migrant workers and refugees, police brutality, and other abuses of human and natural rights. She gives concrete examples of positive ways in which border people are promoting local culture and cross-border solidarity through health care, commerce, food, art, and music. While death and suffering continue to occur, The Beloved Border shows us how the U.S.-Mexico border could be, and in many ways already is, a model for peaceful coexistence worldwide.

Miriam Davidson is a Tucson-based writer whose work focuses on border issues. She is author of two previous University of Arizona Press books, Convictions of the Heart and Lives on the Line.

“Davidson brings more than thirty years of reporting to the borderlands to give this thorough rendition of not only what the border is now, but how it could be an even more beautiful place in the future.”—Todd Miller, author of Empire of Borders

"Miriam Davidson has written the essential introduction to the borderlands of Southern Arizona and Sonora, Mexico. Through the stories of diverse individuals and cultures, insightful history, and the devastation of political and economic policy from distant powers; she weaves a unique tapestry of inspiring resilience and organized resistance. The beloved community endures!"—Reverand John Fife, pastor emeritus of Southside Presbyterian Church in Tucson and co-founder of the immigrant rights group No More Deaths

"Davidson has written a wide-ranging account of the borderlands that join Mexico and the U.S. Southwest together. She details this land’s history from the early days of rum running across the border all the way up to today’s horrifying cartel murders in Mexico and the deaths of thousands of migrants in the treacherous American deserts. She is clear-eyed about its violence, but she also sees beauty in The Beloved Border, a place of extraordinary landscapes and wildlife, and she finds hope in its people of good will 'leading the way … to peaceful coexistence.'"—Margaret Regan, author of The Death of Josseline: Immigration Stories from the Arizona Borderlands and Detained and Deported: Stories of Immigrant Families Under Fire

Praise for Miriam Davidson
“The stories that stand out the most are Davidson’s vivid portraits of those who have been left behind by economic progress.”—New York Times Book Review

“Davidson’s journalistic eye captures the legacy of squalor and misery that greed and irresponsibility have created along the borderlands. There is nothing new in this, but the stories Davidson tells form a textbook on just how closely woven evil and good, banality and heroism can be. . . . Ambos Nogales has something to teach all of us, and Davidson shares these lessons well.”—National Catholic Reporter

“Davidson offers hope for progress in the troubled region. Timely and compelling.”—Booklist