The Author and His Doubles: Essays on Classical Arabic Culture (Middle East Literature in Translation) (Paperback) 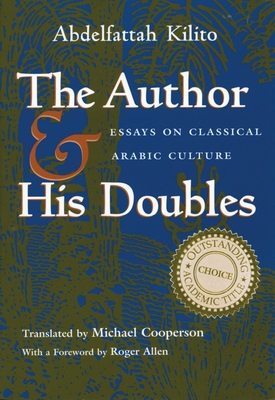 Michael Cooperson's translation makes Abdelfattah Kilito's masterpiece available to English-speaking audiences for the first time. Called the most inventive and provocative critic of Arabic literature writing in the Middle East today, Kilito opens our perception with the same breadth of vision, seeking to define the traditional and historical forces that bind one writer to another and that inextricably link an author to a text.

This volume benefits from Cooperson's accomplished translation. While rigorously precise, it also allows the wit and humor and the lyricism of Kilito's prose full expression. Drawing on major themes of classical Arabic literature, the essays use simple, poetic language to argue that genre, not authorship, is the single most important feature of classical works. Kilito discusses love poetry and panegyric, the Prophet's Hadith, and the literary anecdote, as well as offering novel readings of recurrent themes such as memorization, plagiarism, forgery, and dream visions of the dead.

Abdelfattah Kilito, professor in the department of French at Muhammad V University in Rabat, Morocco, has published extensively on Arabic literature. He has been a visiting scholar at the Ecole des Hautcs Etudes en Science Sociales, the College de France, and Harvard University. In I 989 he was awarded the Grand Prix du Maroc. Michael Cooperson teaches at the University of California at Los Angeles and is the author of Classic Arabic Biography: The Heirs of the Prophets in the Age of al-Ma'mun.