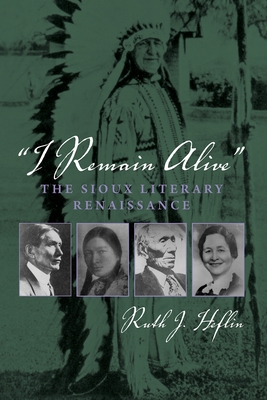 Ruth J. Heflin contends that the Native American Literary Renaissance, traditionally thought to have begun in 1968 with the publication of N. Scott Momaday's House Made of Dawn, actually began in 1890 soon after the battle
of Wounded Knee. It was with the articles of Charles Eastman (1858-1939), the earliest of the five writers, that the Renaissance began.

Heflin shows that the Sioux nation produced more book-length manuscripts in this period between Wounded Knee and the end of World War II than any other tribe. Moreover, their writings were not just autobiographical, as is typically thought, but anthropological, including fiction and nonfiction, and highly stylized memoir. No other transitional nation produced writers who wrote so extensively for the general American audience, let alone so many works that incorporated both Native American and Western literary techniques. Their stories helped shape the future of America: its identity; its developing appreciation of nature; its acceptance of alternative religions and medical practices; an awareness of the oral tradition; and a sense of multiculturalism. Historically overlooked, largely because they were Indian, Heflin seeks to place these writers alongside American and English modernist works and within mainstream literature.

Ruth J. Heflin is assistant professor of English at Kansas City, Kansas Community College. She is a contributor to The Black Elk Reader, also published by Syracuse University Press.