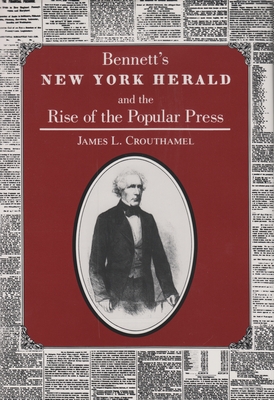 With the founding of the New York Herald in 1835, James Gordon Bennett began what was to become the most successful and widely circulated newspaper of mid-nineteenth-century America. He did not invent the cheap popular newspaper, but his innovations, a combination of sensationalism, technological improvements, and comprehensive news coverage, made the Herald the prototype of modern journalism and the best newspaper of its time. Subsequent yellow journalists like Joseph Pulitzer and William Randolph Hearts merely carried Bennett's techniques to new heights--or depths.
Bennett championed the masses and created a newspaper for them. Priced cheap enough for most New Yorkers to afford, the Herald served up information that was useful, educational, and entertaining. Articles covered the whole range of human activity--sex, crime, tragedy, medicine, religion, culture.
This book is not a biography of Bennett but rather an account of him as editor and publisher. His editorials were notorious for their rhetorical extremism, and his public identity was based on negatives--Anglophobia, anti-Catholicism, and anti-abolitionism in particular. He misled his unsophisticated readers with simplistic explanations of events and forces that affected their lives. He claimed to be politically independent, above party, but he was constantly enmeshed in the party battles of the period. His contemporaries envied his success bit detested the means by which he achieved it; they respected his power but hated him personally.
Former accounts of Bennett have been anecdotal and superficial. James. L. Crouthamel has based his research primarily on a day-by-day reading of over three decades of the Herald and thus provides useful facts and assessments of a major period in the history of journalism.

James L. Crouthamel was professor of history at Hobart and William Smith Colleges. He contributed articles to Journalism Quarterly, Journal of Negro History, and New York History and is the author of James Watson Webb: A Biography.