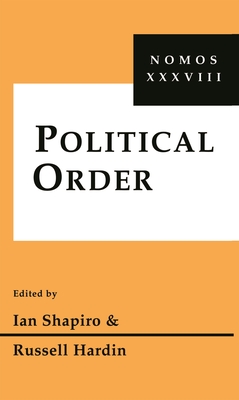 By Ian Shapiro (Editor), Russell Hardin (Editor)
This Book Is Not Sold Online - Inquire In Store

This is book number 18 in the Nomos - American Society for Political and Legal Philosophy series.

The collapse of the Soviet empire stands as a dramatic reminder that political institutions are human creations that can be designed more or less well. The question of what constitutes a viable political order is as old as it is profound, and is a central part of the works of such thinkers as Plato, Aristotle, Machiavelli, Hobbes, Locke, Montesquieu, and the American Founders.
In eighteen original essays, Political Order presents the work of major scholars such as Robert Dahl, John Gray, Jennifer Nedelsky, Pasquale Pasquino, James Scott, Karen Orren, Steven Skowronek, Walter Dean Burnham, Morris Fiorina, and Norman Schofield who address some of the most pressing questions about political order. Under what conditions do we get political order rather than political chaos? How is political order sustained once it has been created? Do constitutions and electoral systems matter, and if so how much? Is there one best type of political order, and, if not, what is the range of viable possibilities and how should they be evaluated?

Ian Shapiro is Sterling Professor of Political Science at Yale University, where he also serves as Henry R. Luce Director of the Yale Center for International and Area Studies. He is the editor or author of numerous books, most recently "Political Contingency" (NYU Press) and "Rethinking Political Institutions" (NYU Press).