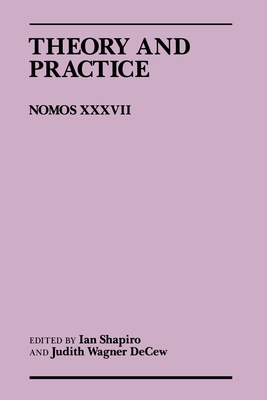 By Ian Shapiro (Editor), Judith Wagner Decew (Editor)
This Book Is Not Sold Online - Inquire In Store
Out of Print

This is book number 2 in the Nomos - American Society for Political and Legal Philosophy series.

With 16 original essays all published here for the first time, Theory and Practice focuses on the relationship between philosophical tradition and everyday life in the Western tradition. In this comprehensive volume, Ian Shapiro and Judith Wagner DeCew have gathered contributions from some of the most influential thinkers of our generation including Cass Sunnstein, Jean Bethke Elshtain, Martha Nussbaum, Jeremy Waldron, and Kent Greenwalt.
What are the relations between philosophical theories and everyday life? This question, as old as it is profound, is the central focus of Theory and Practice. The contributors include some of the most influential thinkers of our generation, among them Cass Sunnstein, Jean Bethke Elshtain, Martha Nessbaum, Jeremy Waldron, and Kent Greenwalt. In sixteen chapters--all published here for the first time--the authors examine major attempts to reconcile theory with practice in the Western tradition from Herodotus, Plato, and Aristotle to Kant and Heidegger.
Considerable attention is devoted to the role of theory in judicial decision-making, debates between defenders of the value of pure theory and those who argue for the priority of practice, the political implications of theory, practical problems such as global warming, and the theoretical commitments of practitioners from Karl Marx to Vaclav Havel. One of the most expansive volumes in the NOMOS series to date, Theory and Practice will be of interest to philosophers, lawyers, and social scientists from a wide range of disciplines.

Ian Shapiro is Sterling Professor of Political Science at Yale University, where he also serves as Henry R. Luce Director of the Yale Center for International and Area Studies. He is the editor or author of numerous books, most recently "Political Contingency" (NYU Press) and "Rethinking Political Institutions" (NYU Press).