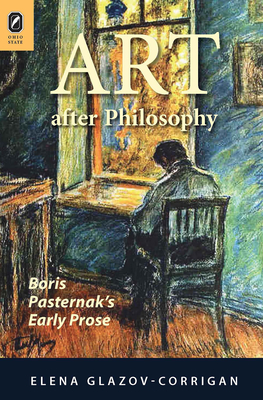 Art after Philosophy: Boris Pasternak’s Early Prose, by Elena Glazov-Corrigan, redefines an area in Slavic studies which has suffered from neglect for several decades, namely, Pasternak’s early prose narratives. In her bold new study, Glazov-Corrigan analyzes the conceptual networks of thought Pasternak developed when he turned to literature after abandoning the study of Neo-Kantianism in Marburg during the summer of 1912. This book shows conclusively that Pasternak’s knowledge of philosophy is inseparable from his prose works, even though in his early stories and novellas (1913–1918) philosophical ideas operate neither as discrete textual units nor as micro-elements or clusters of possible signification. In the early Pasternak, philosophy becomes a narrative art, a large-scale narrative frame, a manner of seeing rather than of constructing reality. After Roman Jakobson’s famous 1935 essay, which characterized the early Pasternak as a “virtuoso of metonymy,” in contrast to the metaphoric Mayakovsky, no other approach has been able to generate comparable scholarly influence. The present study takes up the implicit challenge of this critical impasse. Entering into a debate with Jakobson’s findings, Art after Philosophy illuminates Pasternak’s boldest artistic experiments and suggests to his readers entirely new ways of approaching not only his early but also his later writing.

Elena Glazov-Corrigan is associate professor of Russian and comparative literature at Emory University.

“By bringing the philosophical studies Pasternak had just abandoned to bear on his early prose, Elena Glazov-Corrigan transforms this seemingly inhospitable terrain into a fruitful zone that illuminates the early phases of the writer’s career and, what is more, significantly enriches our reading of his subsequent literary trajectory. Thanks to Glazov-Corrigan’s study, the awkward jostling of his early and late periods that has been the sine qua non of Pasternak studies gives way to a vision of his creative unfolding.” —Olga Peters Hasty, professor of Slavic languages and literatures, Princeton University

“Art after Philosophy is of extraordinary importance. It is filling a gap strongly felt by Pasternak scholars aware of these materials, but without the philosophical background, the German language ability, the ambition to explore these materials in the detail required to undertake such a study.” —Karen Evans-Romaine, associate professor of Slavic languages and literature at the University of Wisconsin–Madison