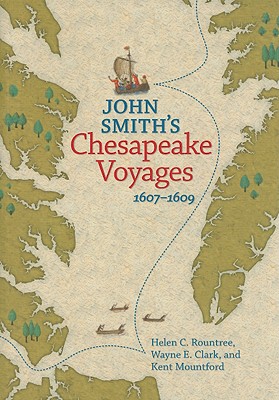 Captain John Smith's voyages throughout the new world did not end--or, for that matter, begin--with the trip on which he was captured and brought to the great chief Powhatan. Partly in an effort to map the region, Smith covered countless leagues of the Chesapeake Bay and its many tributary rivers, and documented his experiences. In this ambitious and extensively illustrated book, scholars from multiple disciplines take the reader on Smith's exploratory voyages and reconstruct the Chesapeake environment and its people as Smith encountered them.

Beginning with a description of the land and waterways as they were then, the book also provides a portrait of the native peoples who lived and worked on them--as well as the motives, and the means, the recently arrived English had at their disposal for learning about a world only they thought of as "new." Readers are then taken along on John Smith's two expeditions to map the bay, an account drawn largely from Smith's own journals and told by the coauthor, an avid sailor, with a complete reconstruction of the winds, tides, and local currents Smith would have faced.

The authors then examine the region in more detail: the major river valleys, the various parts of the Eastern Shore, and the head of the Bay. Each area is mapped and described, with added sections on how the Native Americans used the specific natural resources available, how English settlements spread, and what has happened to the native people since the English arrived. The book concludes with a discussion on the changes in the region's waters and its plant and animal life since John Smith's time--some of which reflect the natural shifts over time in this dynamic ecosystem, others the result of the increased human population and the demands that come with it.

Published by the University of Virginia Press in association with Chesapeake Bay Gateways Network, and the U.S. National Park Service, Virginia Department of Historic Resources, and Maryland Historical Trust.

Helen C. Rountree, Professor Emerita of Anthropology at Old Dominion University, is the author most recently of Pocahontas, Powhatan, Opechancanough: Three Indian Lives Changed by Jamestown (Virginia). Wayne E. Clark is Executive Director of the Tri-County Council of Southern Maryland. Ecologist and environmental historian Kent Mountford is the author of Closed Sea: From the Manasquan to the Mullica.