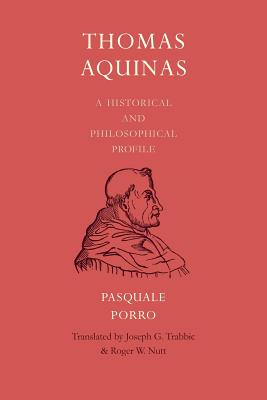 "In his highly-regarded Thomas Aquinas: A Historical and Philosophical Profile, while grasping fully that by profession and self-understanding Thomas Aquinas was formally a Christian theologian for whom philosophy as such was a noble artifact of an un-Christian past, Pasquale Porro demonstrates that nonetheless in each of his writings Thomas turned decisively to the ancient discipline, at the time embodied in the Arts faculty of the university, not only to ground and guide his reform of theological pedagogy but also, as a sage, to engage directly the complete system of profane sciences. Reflecting the highest standards of philological and textual scholarship (notably the decades-long research of the Leonine Commission) accompanied by judicious philosophic analysis, Porro lucidly exposes the salient philosophical issues in each of Thomas's writings, which he presents in chronological order and interprets within the parameters of the temporal circumstances and institutional imperatives of their composition and in respect of the authoritative texts that Thomas encountered. The clear translation of Porro's original Italian text by Joseph Trabbic and Roger Nutt will make his masterful study readily accessible to English-speaking students and enthusiasts of Thomas Aquinas, and will serve to refine and elevate their discourse about the medieval Dominican." - Kent Emery, Jr., University of Notre Dame "Biographically situating this thinker's thought and works in time, place, and philosophical and theological context, Porro accomplishes his ambitious task with lucid accounts of major philosophical teachings spelling out the reasoning of Aquinas and Avicenna in the development of his teachings throughout his career. Porro's unique contextual approach to the writings of Aquinas and his astute analyses of arguments make this work both an invaluable introductory volume for students and at the same time an insightful overview for philosophers, theologians, and historians of ideas." - Richard C. Taylor, Marquette University.