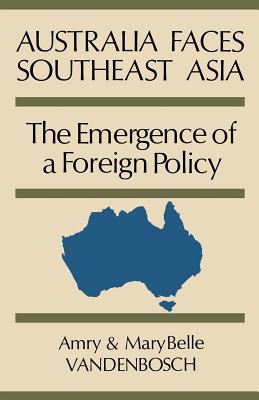 Australia as a Western society in the Orient faces a unique and paradoxical challenge in her relations with her close but unfamiliar neighbors of Southeast Asia. Explicitly dependent upon British foreign policy until the fall of Singapore in 1942, Australia has reluctantly and painfully begun the task of developing a policy of her own. The Japanese conquest of Southeast Asia and many of the Pacific islands during the Second World War awakened Australia to the need to secure her own defenses a.

Amry Vandenbosch is professor emeritus of political science and former director of the Patterson School of Diplomacy and International Commerce at the University of Kentucky. He is coauthor of Toward World Order, Southeast Asia among the World Powers, and The Changing Face of Southeast Asia. Like her husband, Mary Belle Vandenbosch is a graduate of the University of Chicago.