Gardens of Water: A Novel (Paperback) 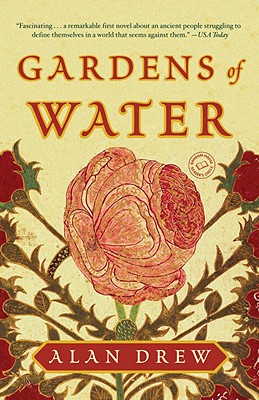 Gardens of Water is an enthralling story of two families, and two faiths, in Turkey at the time of the cataclysm of 1999. It tells of Sinan, whose daughter, Irem, dreams of escaping the confines of her family and the duties of a devout Muslim woman. She sees in Dylan, an American boy and her upstairs neighbor, the enticing promise of another life. But then a massive earthquake forces Sinan and his family to live as refugees in their own country and leads to a dangerous intimacy with their American neighbors, as Irem and Dylan fall in love. When Sinan finds himself entangled in a series of increasingly dangerous decisions, he will be pushed toward a final betrayal that will change everyone’s lives forever. Powerful and beautifully written, Alan Drew’s Gardens of Water marks the debut of a brilliant new American writer.

Alan Drew was born and raised in Southern California and has traveled throughout Europe, Asia, and the Middle East. He taught English literature for three years at a private high school in Istanbul, arriving just four days before the devastating 1999 Marmara earthquake. In 2004 he completed a master of fine arts degree at the Iowa Writers’ Workshop, where he was awarded a Teaching/Writing Fellowship. He lives with his wife and son in Cincinnati.