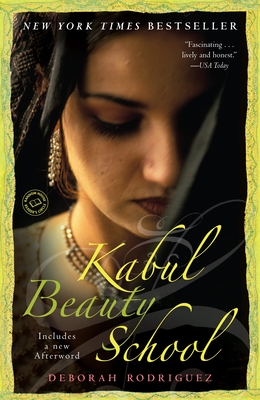 By Deborah Rodriguez, Kristin Ohlson
$17.00
Unavailable, Out of Stock, or Out of Print

Soon after the fall of the Taliban, in 2001, Deborah Rodriguez went to Afghanistan as part of a group offering humanitarian aid to this war-torn nation. Surrounded by men and women whose skills–as doctors, nurses, and therapists–seemed eminently more practical than her own, Rodriguez, a hairdresser and mother of two from Michigan, despaired of being of any real use. Yet she soon found she had a gift for befriending Afghans, and once her profession became known she was eagerly sought out by Westerners desperate for a good haircut and by Afghan women, who have a long and proud tradition of running their own beauty salons. Thus an idea was born.

With the help of corporate and international sponsors, the Kabul Beauty School welcomed its first class in 2003. Well meaning but sometimes brazen, Rodriguez stumbled through language barriers, overstepped cultural customs, and constantly juggled the challenges of a postwar nation even as she learned how to empower her students to become their families’ breadwinners by learning the fundamentals of coloring techniques, haircutting, and makeup.

Yet within the small haven of the beauty school, the line between teacher and student quickly blurred as these vibrant women shared with Rodriguez their stories and their hearts: the newlywed who faked her virginity on her wedding night, the twelve-year-old bride sold into marriage to pay her family’s debts, the Taliban member’s wife who pursued her training despite her husband’s constant beatings. Through these and other stories, Rodriguez found the strength to leave her own unhealthy marriage and allow herself to love again, Afghan style.

With warmth and humor, Rodriguez details the lushness of a seemingly desolate region and reveals the magnificence behind the burqa. Kabul Beauty School is a remarkable tale of an extraordinary community of women who come together and learn the arts of perms, friendship, and freedom.

Deborah Rodriguez has been as a hairdresser since 1979, except for one brief stint when she worked as a corrections officer in her hometown of Holland, Michigan. She currently directs the Kabul Beauty School, the first modern beauty academy and training salon in Afghanistan. Rodriguez also owns the Oasis Salon and the Cabul Coffee House. She lives in Kabul with her Afghan husband.

“Deborah Rodriguez went to Afghanistan to transform her own life and ended up revolutionizing the lives of many of her Afghan sisters. This book made me feel like I was right there in the beauty salon, sharing in the tears and laughter as, outside my door, an entire country changed. KABUL BEAUTY SCHOOL is inspiring, exciting, and not to be missed.”
–Masha Hamilton, author of The Distance Between Us and The Camel Bookmobile

"An enthralling story from the opening page. Rodriugez's memoir captivated me with its humor and feminine power. A more apt name for a salon could not be found: that small building, where the practice of beauty is both an act of defiance and tradition, is indeed an oasis. A place I was very happy to linger in."
–Marsha Mehran, author of Pomegranate Soup

“ Rodriguez writes an eye-opening and heart rendering story of tenacity and courage as she empowers, employs and enriches the women of Kabul to run their own beauty parlor businesses. In her writing she gives a new voice to the people of Afghanistan. You will finish it and want to meet her!”
–Carol Fitzgerald, Founder/President of Bookreporter.com