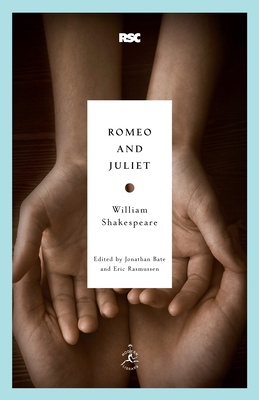 In a society dominated by religion and bound by ties of strict family loyalty, two teenagers are trapped by their secret love. As a dangerous vendetta spills onto the streets, the young lovers are forced to risk all to be together in Shakespeare’s fast-paced tragedy of thwarted love.

Under the editorial supervision of Jonathan Bate and Eric Rasmussen, two of today’s most accomplished Shakespearean scholars, this Modern Library series incorporates definitive texts and authoritative notes from William Shakespeare: Complete Works. Each play includes an Introduction as well as an overview of Shakespeare’s theatrical career; commentary on past and current productions based on interviews with leading directors, actors, and designers; scene-by-scene analysis; key facts about the work; a chronology of Shakespeare’s life and times; and black-and-white illustrations.

Ideal for students, theater professionals, and general readers, these modern and accessible editions from the Royal Shakespeare Company set a new standard in Shakespearean literature for the twenty-first century.

WILLIAM SHAKESPEARE (1564-1616) is today's most widely known and loved playwright.

THE ROYAL SHAKESPEARE COMPANY (RSC) is a world-renowned ensemble theater company in Stratford and London dedicated to bringing the works of Shakespeare and his contemporaries to a modern audience.

JONATHAN BATE is a professor of Shakespeare and Renaissance Literature at the University of Warwick. A prominent critic, award-winning biographer and broadcaster, Bate's books on Shakespeare include Soul of the Age.

ERIC RASMUSSEN, professor of English at the University of Nevada, is one of today's leading textual experts on Shakespeare.

“A feast of literary and historical information.”
-The Wall Street Journal