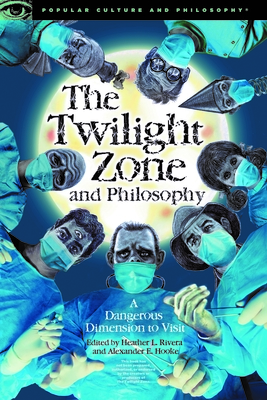 This is book number 121 in the Popular Culture and Philosophy series.

In The Twilight Zone and Philosophy, philosophers probe into the meaning of the classic TV series, The Twilight Zone. Some of the chapters look at single episodes of the show, while others analyze several or many episodes. Though acknowledging the spinoffs and reboots, the volume concentrates heavily on the classic 1959-1964 series. Among the questions raised and answered are: ● What's the meaning of personal identity in The Twilight Zone? ("Number 12 Looks Just Like You," "Person or Persons Unknown"). ● As the distinction between person and machine becomes less clear, how do we handle our intimacy with machines? (A question posed in the very first episode of The Twilight Zone, "The Lonely"). ● Why do our beliefs always become uncertain in The Twilight Zone? ("Where Is Everybody?") ● Just where is the Twilight Zone? (Sometimes it's a supernatural realm but sometimes it's the everyday world of reality.) ● What does the background music of The Twilight Zone teach us about dreams and imagination? ● Is it better to lose the war than to be damned? ("Still Valley") ● How far should we trust those benevolent aliens? ("To Serve Man") ● Where's the harm in media addiction? ("Time Enough at Last") ● Is there something objective about beauty? ("The Eye of the Beholder") ● Have we already been conquered? ("The Monsters Are Due on Maple Street") ● Are there hidden costs to knowing more about other people? ("A Penny for Your Thoughts")