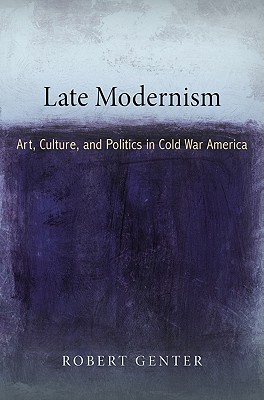 By Robert Genter
$55.00
Unavailable, Out of Stock, or Out of Print

In the thirty years after World War II, American intellectual and artistic life changed as dramatically as did the rest of society. Gone were the rebellious lions of modernism--Joyce, Picasso, Stravinsky--and nearing exhaustion were those who took up their mantle as abstract expressionism gave way to pop art, and the barren formalism associated with the so-called high modernists wilted before the hothouse cultural brew of the 1960s. According to conventional thinking, it was around this time that postmodernism with its characteristic skepticism and relativism was born.

In Late Modernism, historian Robert Genter remaps the landscape of American modernism in the early decades of the Cold War, tracing the combative debate among artists, writers, and intellectuals over the nature of the aesthetic form in an age of mass politics and mass culture. Dispensing with traditional narratives that present this moment as marking the exhaustion of modernism, Genter argues instead that the 1950s were the apogee of the movement, as American practitioners--abstract expressionists, Beat poets, formalist critics, color-field painters, and critical theorists, among others--debated the relationship between form and content, tradition and innovation, aesthetics and politics. In this compelling work of intellectual and cultural history Genter presents an invigorated tradition of late modernism, centered on the work of Kenneth Burke, Ralph Ellison, C. Wright Mills, David Riesman, Jasper Johns, Norman Brown, and James Baldwin, a tradition that overcame the conservative and reactionary politics of competing modernist practitioners and paved the way for the postmodern turn of the 1960s.