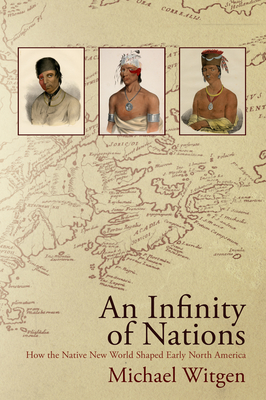 An Infinity of Nations explores the formation and development of a Native New World in North America. Until the middle of the nineteenth century, indigenous peoples controlled the vast majority of the continent while European colonies of the Atlantic World were largely confined to the eastern seaboard. To be sure, Native North America experienced far-reaching and radical change following contact with the peoples, things, and ideas that flowed inland following the creation of European colonies on North American soil. Most of the continent's indigenous peoples, however, were not conquered, assimilated, or even socially incorporated into the settlements and political regimes of this Atlantic New World. Instead, Native peoples forged a New World of their own. This history, the evolution of a distinctly Native New World, is a foundational story that remains largely untold in histories of early America.

Through imaginative use of both Native language and European documents, historian Michael Witgen recreates the world of the indigenous peoples who ruled the western interior of North America. The Anishinaabe and Dakota peoples of the Great Lakes and Northern Great Plains dominated the politics and political economy of these interconnected regions, which were pivotal to the fur trade and the emergent world economy. Moving between cycles of alliance and competition, and between peace and violence, the Anishinaabeg and Dakota carved out a place for Native peoples in modern North America, ensuring not only that they would survive as independent and distinct Native peoples but also that they would be a part of the new community of nations who made the New World.

Michael Witgen is Associate Professor and Director of Native American Studies at the University of Michigan.