The Cable Car and the Dragon (Paperback) 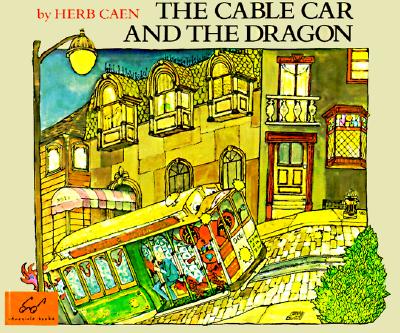 This is the rollicking tale of the adventures of Charlie, the youngest cable car. Only sixty years old, he is tired of the same old rut. One night as he's puffing himself up Nob Hill, he hears a lot of excitement down below: Chinese New year! Suddenly, Charlie takes a right turn at Jackson Street, rather than the left he has taken for sixty years, and he finds himself in the middle of the parade. There he meets a friendly dragon named Chu Chin Chow, who is bored with his job. Charlie treats Chu to a cable car ride that looks as if it will end in a disastrous plunge into the San Francisco Bay--unless a miracle occurs.

--SMALL PRESS BOOK REVIEW
The Cable Car and the Dragon is a well-told children's story which takes place in San Francisco. Appropriate to the setting, the story is about a famous cable car and a Chinese dragon. It is delightful and fast-paced, taking its young readers (ages 6-10) frolicking through the streets of San Francisco to the bay at the edge of the city.

After sixty years of puffing up the same hills and clinging to the same track, Charlie, the youngest cable car in the city, deviates from his assigned route, turning right into Chinatown instead of the usual left at the end of Nob Hill. Charlie lumbers into the midst of a Chinese New Year parade and befriends its main attraction, a Chinese dragon named Chu Chin Chow who is equally dissatisfied with his lot, which is marching in the parade every year. Chow shows Charlie all of the attractions of the parade, and in retum Charlie takes Chow on a thrilling and almost disastrous ride through the hills and streets of San Francisco.

The experiences of these two are told in such a way that the reader learns much about the famous city of San Francisco, including not only Chinatown and the hills and streets, but even the weather: "When the city is all covered with fog, it's like living inside a great gray pearl."

Author Herb Caen is the well-known columnist for the San Francisco Chronicle. He has published other, adult books on San Francisco. This is his first children's book. Barbara Byfield, the illustrator, has illustrated and written books for children.

--THE NEW YORK TIMES BOOK REVIEW, August 10, 1986
A reissue of the 1972 book by the popular columnist for The San Francisco Chronicle, this is the story of Charlie, the youngest cable car in the city, who encounters Chinese New Year's and joins the parade.

This is delightful and fast-paced, taking its young readers frolicking through the streets of San Francisco to the bay at the edge of the city. Small Press Book Review