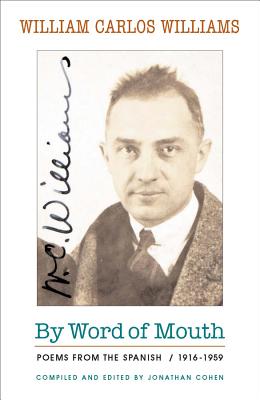 By William Carlos Williams, Jonathan Cohen (Editor), Julio Marzán (Foreword by)
$18.95
Unavailable, Out of Stock, or Out of Print

This is book number 1210 in the New Directions Paperbook series.

The first collection of translations of Spanish and Latin American poetry by William Carlos Williams, containing many previously unknown poems.

William Carlos Williams (1883–1963) produced a startling number of translations of both Spanish and Latin American poetry starting during WWI and continuing through the late fifties. Williams grew up in a Spanish-speaking home and sometimes described himself as half-Spanish. His mother was Puerto Rican and his father spoke Spanish fluently. “Spanish is not, in the sense to which I refer, a literary language,” Williams wrote in his Autobiography. “It has a place of its own, an independent place very sympathetic to the New World.”

Williams approached translation as a way not only to present the work of unknown Spanish poets, but also to extend the range and capacity of American poetry, to use language “with unlimited freshness.” Included in this bilingual edition are beautifully rendered translations of poets well-known — Neruda, Paz, and Parra — and lesser-known: Rafael Are´valo Marti´nez (from Guatemala), Rafael Beltra´n Logron~o (from Spain), and Eunice Odio (from Costa Rica).

Besides being a practicing physician, William Carlos Williams (1883–1963) was a poet, short-story writer, novelist, translator, playwright, and essayist whose contribution to the development of modern American poetry grew out of his commitment to recording the "local" experience of Rutherford, New Jersey, and its environs.

Jonathan Cohen is the editor and compiler of William Carlos Williams’ By Word of Mouth: Poems from the Spanish,1916–1959 and editor and translator of Ernesto Cardenal’s Pluriverse: New and Selected Poems, both published recently by New Directions.

Jonathan Cohen shows us why translation is crucial to understanding Williams, who approached it as an essential act of poetry. The poet emerges as the first among our modernist writers to see the literary value of translating classical and contemporary verse from both Spain and Latin America. By Word of Mouth makes that clear.

This book will reinforce the sense of Williams as one deeply invested in the language and rhythm of the New World — North as well as South.
— Paul Mariani, author of William Carlos Williams, A New World Naked

The great pleasure of By Word of Mouth, Williams’ translations of poems from the Spanish, which he did throughout his career, is reading Williams as he puts on the language of Quevedo, Hernández, Neruda, and Parra, among many others, including his own mother. He saw translation as a way to practice and learn his craft, and in this he both takes part in an ongoing tradition of poetry and sets himself apart from the Modernists we think of as his peers, except for Ezra Pound. This collection is the first record I know of of an ongoing engagement with the poetry of Williams’ first language.
— Mark Jarman - The Hudson Review