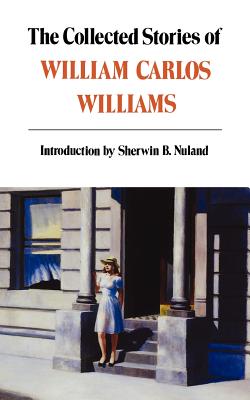 This is book number 827 in the New Directions Paperbook series.

New Directions has long published poet William Carlos Williams’ entire body of short fiction as The Farmers’ Daughters (1961). This new edition of The Collected Stories of William Carlos Williams contains all fifty-two stories combining the early collections The Knife of the Times (1932), Life Along the Passaic (1938) with the later collection Make Light of It (1950) and the great long story, “The Farmers’ Daughters” (1956). When these stories first appeared, their vitality and immediacy shocked many readers, as did the blunt, idiosyncratic speech of Williams’ immigrant and working-class characters. But the passage of time has silenced the detractors, and what shines in the best of these stories is the unflinching honesty and deep humanity of Williams’ portraits, burnished by the seeming artlessness which only the greatest masters command.

Besides being a practicing physician, William Carlos Williams (1883–1963) was a poet, short-story writer, novelist, translator, playwright, and essayist whose contribution to the development of modern American poetry grew out of his commitment to recording the "local" experience of Rutherford, New Jersey, and its environs.

So these 50-odd stories are among the most precious possessions of the 20th century in any language. And when they come to ask, ‘What were they like?’ we can say, ‘This is us.’
— Kenneth Rexroth - The New Leader