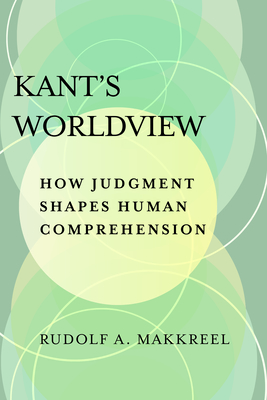 By Rudolf A. Makkreel
This Book Is Not Sold Online - Inquire In Store

In Kant’s Worldview: How Judgment Shapes Human Comprehension, Rudolf A. Makkreel offers a new interpretation of Immanuel Kant’s theory of judgment that clarifies Kant’s well-known suggestion that a genuine philosophy is guided by a world‑concept (Weltbegriff). Makkreel shows that Kant increasingly expands the role of judgment from its logical and epistemic tasks to its reflective capacity to evaluate objects and contextualize them in worldly terms. And Makkreel shows that this final orientational power of judgment supplements the cognition of the understanding with the comprehension originally assigned to reason.

To comprehend, according to Kant, is to possess sufficient insight into situations so as to also achieve some purpose. This requires that reason be applied with the discernment that reflective judgment makes possible. Comprehension, practical as well as theoretical, can fill in Kant’s world concept and his sublime evocation of a Weltanschauung with a more down-to-earth worldview.

Scholars have recently stressed Kant’s impure ethics, his nonideal politics, and his pragmatism. Makkreel complements these efforts by using Kant’s ethical, sociopolitical, religious, and anthropological writings to provide a more encompassing account of the role of human beings in the world. The result is a major contribution to our understanding of Kant and the history of European philosophy.

RUDOLF A. MAKKREEL is the Charles Howard Candler Professor Emeritus of philosophy at Emory University. He is the author of many books, including Imagination and Interpretation in Kant: The Hermeneutical Import of the Critique of Judgment and Orientation and Judgment in Hermeneutics.

"Makkreel’s study offers a comprehensive interpretation of Kant’s critical philosophy, focusing on the distinction and interaction between a cosmical approach to philosophy and the cosmopolitan aims of philosophy in human community." —CHOICE

“Building on his influential earlier work on Kant’s interpretive notion of judgment, Makkreel’s latest book makes a convincing case that Kant’s orientational concern with an encompassing worldview is a surprisingly helpful key for understanding the structure of the Critical philosophy as a whole. With this point in view, Makkreel uncovers numerous significant connections between a large number of texts that span Kant's career, and he sheds light on them in an original way by paying close attention to Kant's precise terminology.” —Karl Ameriks, author of Kantian Subjects: Critical Philosophy and Late Modernity

"Rudolf Makkreel explores Kant’s rich discussions of ways in which we orient ourselves in the physical and the human worlds. He writes illuminatingly about  Kant’s late philosophy, and in particular about his division of judgements about the world into determinant judgements that subsume cases, and reflective judgements that interpret them. Makkreel shows that, far from peddling one more 'empty formalism,' Kant allows for more things in heaven and earth than are dreamt of in far too many accounts of his philosophy." —Onora O’Neill author of From Principles to Practice: Normativity and Judgement in Ethics and Politics

“Makkreel has long been in the forefront of the movement to grasp Kant not as the philosopher simply of architectonic certainties but of acumen for contingencies, a Kant for humans in a world that is never a matter of pure reason alone, yet remains amenable to reflective negotiation. With this new work, he offers us a sweeping conspectus of Kant’s philosophical enterprise as both pragmatic and robust.” —John Zammito, author of Kant, Herder, and the Birth of Anthropology

“Kant’s Worldview offers something few, if any, books on Kant do: an overarching and expansive account of Kant’s philosophy that paints a comprehensive picture of the human being. It is exactly the kind of book philosophy needs—it makes a sweeping case for Kant’s vision of human life. The culminating discussion of the book on cosmopolitanism and the cosmic is genuinely revolutionary.” —Kristi Sweet, author of Kant on Practical Life: From Duty to History