Health Care Reform: What It Is, Why It's Necessary, How It Works (Paperback) 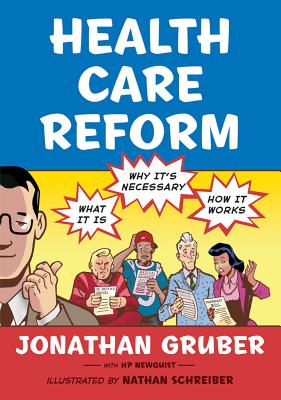 By Jonathan Gruber, Nathan Schreiber (Illustrator)
$15.00
Unavailable, Out of Stock, or Out of Print

You won't have to worry about going broke if you get sick.

We will start to bring the costs of health care under control.

And we will do all this while reducing the federal deficit.

That is the promise of the Affordable Care Act. But from the moment President Obama signed the bill into law in 2010, a steady and mounting avalanche of misinformation about the ACA has left a growing majority of Americans confused about what it is, why it's necessary, and how it works. If you're one of them, buy this book. From how to tame the twin threats of rising costs and the increasing number of uninsured to why an insurance mandate is good for your health, Health Care Reform dispels false fears by arming you with facts.

Dr. Jonathan Gruber is a Professor of Economics at the Massachusetts Institute of Technology, where he has taught since 1992.  He is also the Director of the Health Care Program at the National Bureau of Economics Research, where he is a research Associate.  He is a co-editor of the Journal of Public Economics and an Associate Editor of the Journal of Health Economics. Dr. Gruber received his B.S. in Economics from MIT and his PH.D. in Economics from Harvard.  He has received and Alfred P. Sloan Foundation Research Fellowship, a FIRST award from the National Institute on Aging, and the Kenneth Arrow Award for the Best Paper in Health Economics in 1994.  He was also one of the 15 scientists nationwide to receive the Presidential Faculty Fellow Award from the National Science Foundation in 1995.  Dr. Gruber was elected to the Institute of Medicine in 2005, and in 2006, he received the American Society of Health Economists’ Inaugural Medial for the best health economist in the nation ages 40 and under.  Dr. Gruber’s research focuses on the areas of public finance and health economics.  He has published more than 125 research articles and has edited 6 research volumes.
During the 1997-1998 academic year, Dr. Gruber was on leave from MIT, serving as Deputy Assistant Secretary for Economic Policy at the U.S. Treasury Department.  He was a key architect of Massachusetts’ ambitious health reform effort, and in 2006, he became an inaugural member of the Health Connector Board, the main implementing body for the effort.  In that year, he was named the nineteenth-most powerful person in health care in the United States by Modern Healthcare Magazine.  He acted as a consultant on several presidential campaigns and is considered by the Washington Post to be one of the “most influential” health care experts in America.

Nathan Schreiber's comics have appeared in L'Uomo Vogue, Overflow, and Smith Magazine and on ACT-I-VATE.com. His comic Power Out won a Xeric award and has been nominated for an Eisner award and multiple Harvey awards.

“Jonathan Gruber, one of the country's smartest health care minds, has brought the epic struggle of health reform to life. By explaining the challenges in our health care system as well as the benefits of the reform with imagination and verve, he accomplishes what many have tried and failed to do--he makes the case for health reform as an important achievement for the American people.” —Neera Tanden, President of the Center for American Progress

“Having spent years working to make health care work for Americans, Jonathan Gruber has now provided another service: walking everyone through the benefits of the Affordable Care Act reforms so consumers are armed with accessible information. In an age when information is power, Gruber's book is fun and informative, and it boils down the facts of health care reform for all Americans.” —Senator John Kerry

“If you want to learn about health care reform, you can do no better than to learn from the master. Jonathan Gruber shows how health care reform works in a way that everyone can understand. Read this book. You will not regret it.” —David Cutler, Professor, Department of Economics and Kennedy School of Government, Harvard University

“Jonathan Gruber's straightforward explanation of what the Affordable Care Act does and why will help people understand what's true and what's false about the health reform law. His message is clear and easy to get: when it comes to health care, we're all in it together; and, together, we will benefit from making the Affordable Care Act a success.” —Judy Feder, Professor and former Dean, Georgetown Public Policy Institute